A recent summer spent traveling around South East Asia sparked my now eternal love for hammocks. The majority of places we stayed had a specified hammock area where we would spend our downtime casually swinging between the trees, enjoying the sun and the ultimate relaxation.

I used to be somewhat good at building dens when I was younger, and I can't imagine that erecting a basic hammock can be too complicated. Having never had a hammock in my garden I have been devastatingly limited to regular chairs, which aren't half as fun.

There are multiple different styles, shapes, and sizes of hammocks out there, all of which are achievable DIYs. If you don't have a garden then down lose hope as there are ways of having them inside or hammock chairs for smaller outdoor spaces. 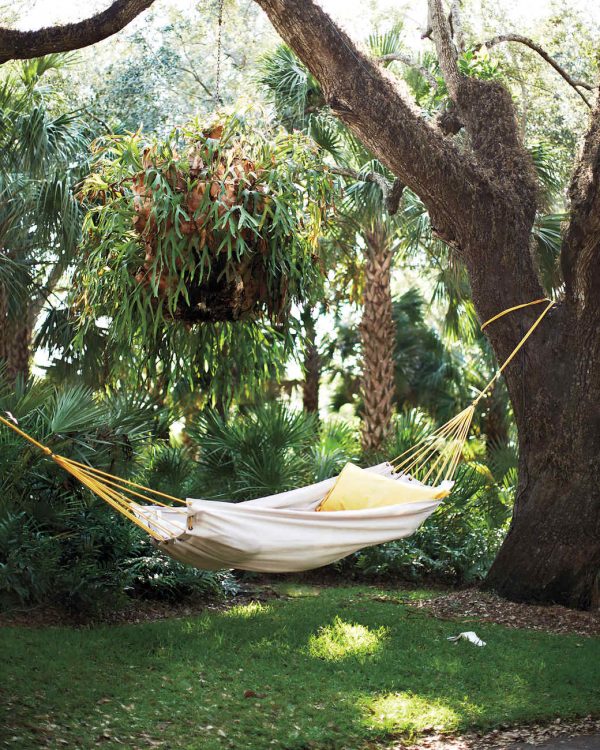 This Drop Cloth Hammock is a pretty classic design, so if you are looking for something simple and relatively unobtrusive, then it would be perfect. Both the drop cloth and the rope look thick and sturdy, so I reckon this would stand the test of time.

I like that this hammock is quite wide, perfect for filing it up with comfy cushions and throws. If you wanted to stick to neutral colors as in this example, then you could do so, but it could be fun to change it up a little. Have a shop around to see the different colors of rope that are available, and consider dyeing the fabric to make it bright and colorful. 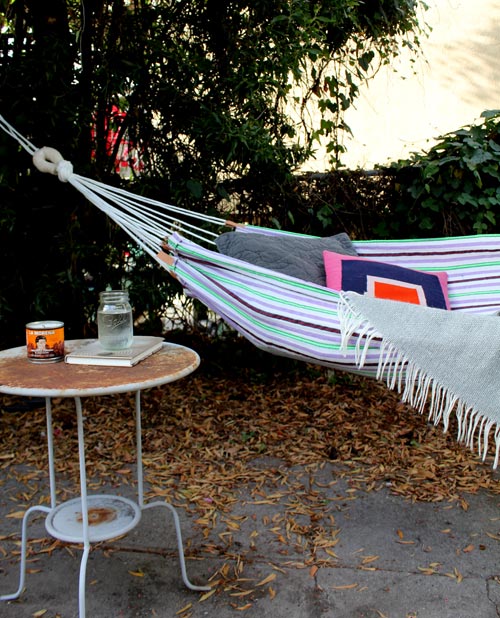 I have come across some seriously funky looking beach towels in my life, so I know for a fact that searching for and choosing one to make this Beach Towel Hammock would be fun.

Another plus side of making a hammock out of a beach towel is that they can be incredibly inexpensive and are obviously easy to find. This DIY comes along with handy step by step photographs to keep you on the right track. There are few materials involved in making this hammock so it could even act as a spontaneous activity for a summer's afternoon. 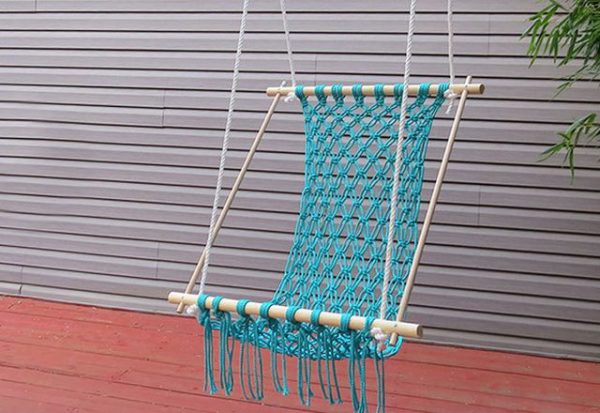 Forget about having a rocking chair on the porch, make yourself one or two of these Macrame Hammock Chairs. I know for sure that you would find me relaxing on one on a summer evening. The weaving of the chords looks like it would be complicated, but although it might be at first you would soon get into the flow of it, and it would be finished before you know.

The trickiest part looks like making the frame, but I am a total amateur and know many people I could enlist the help of, so I am not too worried about it. I can imagine it would be beautiful to use a couple of different colored chords to make this chair, even multiple different ones to create the illusion of a rainbow. 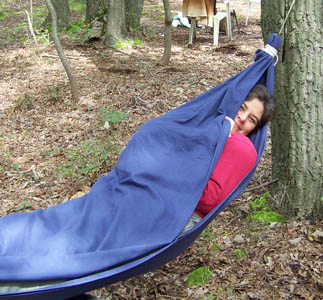 This Bedsheets Hammock is the perfect example of a bit of up-cycling. They have taken a plain old bedsheet and turned it into a serene hammock to swing away in.

The creators of this specific DIY have stumbled upon a genius idea which turns this hammock into a two-in-one. Not only can you use it as a regular hammock, but because the sheet is folded over you can hop in between the folds and use it as an actual bed and cover. This would keep you safe from mosquitos and could be ideal to make when camping instead of having to sleep on the hard ground in a sleeping bag. 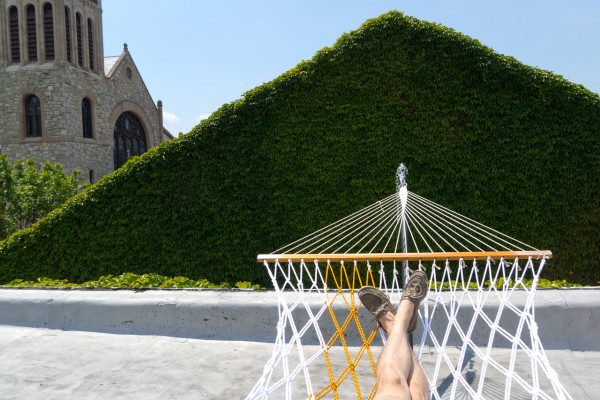 You wouldn't necessarily want to spend a night on a hammock made from rope, but for an afternoon in the sun, it's just perfect. Because it's not made of thick fabric, it will keep you cool and avoid that kind of ‘trapped in' feeling when it cocoons you. I can imagine this being the perfect place to lie with a book and potentially nod off to sleep.

The white and yellow colors of this Two-Tone Sail Rope Hammock are super summery, and the knotting of the chords doesn't look too tricky. Although it states that it is two-tone you are free to use as many colors as you would like, so don't hold back your creativity. 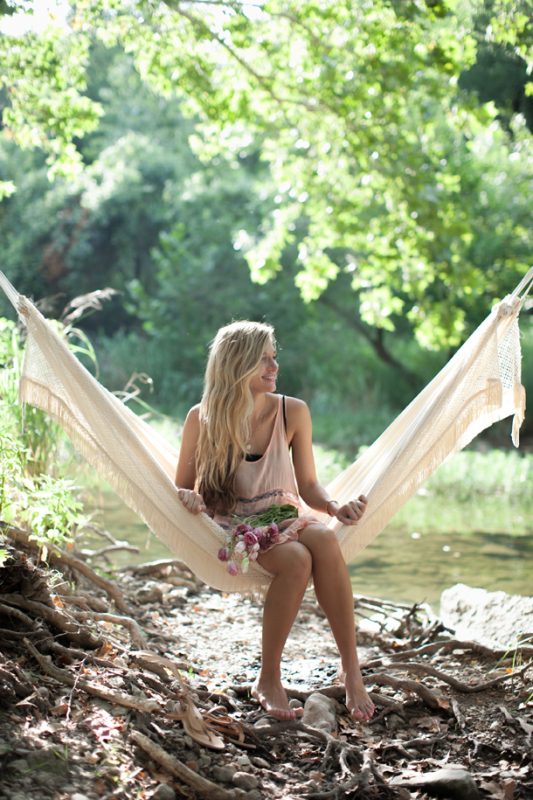 This Lazy Day Hammock is very aptly named in my opinion, as I would love to make and then laze on one right this second.

The base DIY is a very simple hammock made from muslin, what makes it more exciting is the fringe detailing that has been added around the edges. You could apply this technique to any hammock and further experiment with different trimmings, like pompoms or tassels. Because this hammock doesn't use eyelets, like many others do, it is simple to make and doesn't require too many steps. It simply requires you to thread the rope through the fabric. 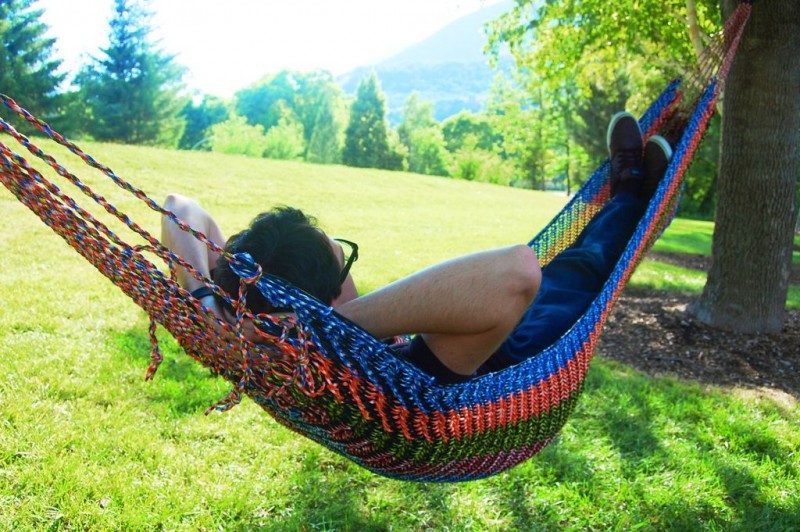 This DIY is rather hefty, with many steps and materials required to make it, but there is no doubt it would be worth every minute you spent making it. Because of the hard work and craftsmanship that goes into its fabrication, you can also be sure that it would last a long time, even when moved between different locations and battling different weather conditions.

I wouldn't be surprised to see this Paracord Hammock in a store, nor would I be surprised if it were pricey. The mix of colors used in this example is beautiful and transforms it from a regular hammock into a piece of artwork for your backyard. 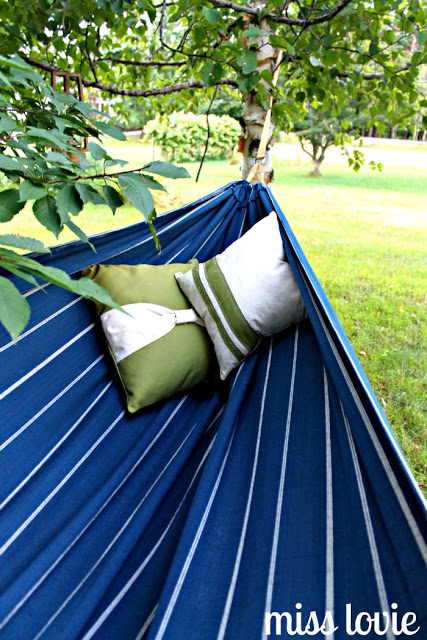 If you're looking for an incredibly efficient yet simple hammock design, then look no further. What drew me to this Simple Hammock was the way it is hung. The combination of the tree straps and the carabiners seems easy to both make and then to attach to whatever tree or beam you might be hanging your hammock from.

There is no tricky drilling or knots involved, meaning that it could be a one-man job. I love the dark blue striped fabric that has been used in this example, as it is more aesthetically pleasing than a plain canvas but still neutral enough not to be a big statement. 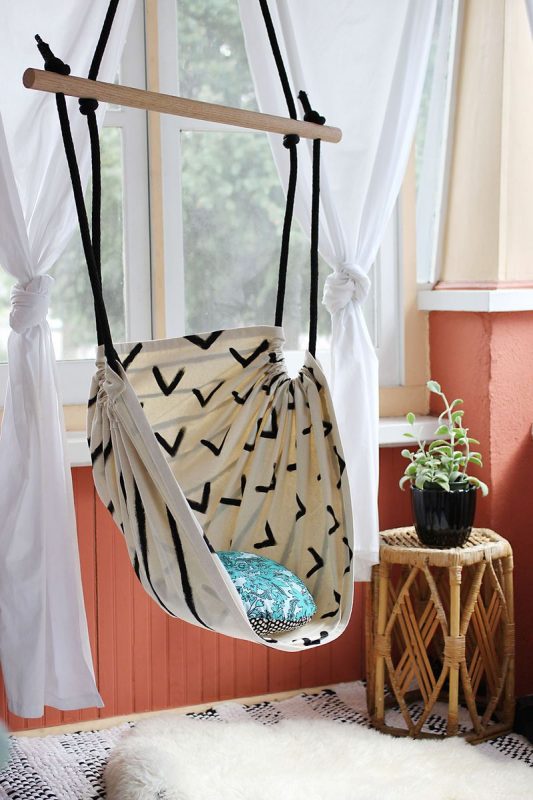 I am desperate to make one of these Hammock Chairs so I can bring my love of hammocks indoors without having an actual full-blown hammock stretched across my living room. My sister used to have a chair similar to this in her bedroom at my parents' house, and it was the comfiest place to sit and read.

This would be perfect for use by any age, I love the idea of having them in a kid's room. The monochrome pattern on the fabric in this example has been painted on, an effect I like the look of, but if you would rather buy a patterned fabric from a store you are free to do so. 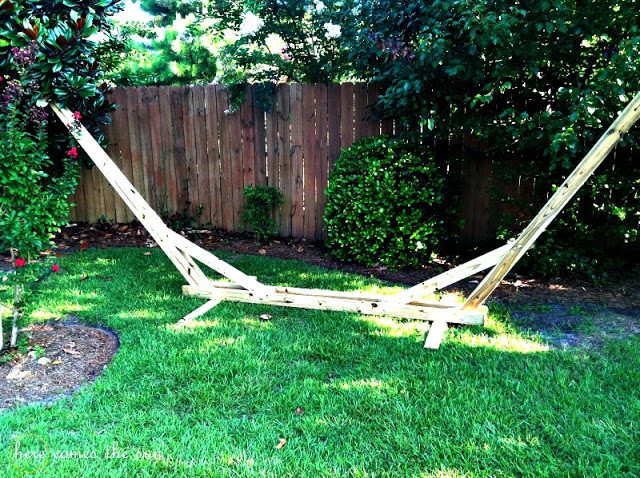 If you aren't lucky enough to have conveniently placed trees to hang a hammock, then you might want to consider constructing this wooden Hammock Stand. I had accepted that my garden doesn't have anywhere I can easily hang a hammock but never believed that it might be relatively simple to make my own solution to the problem.

Coming along with a highly informative DIY and being as inexpensive as it is I reckon this example is very achievable. It even claims it can be done in an afternoon, so set yourself the challenge, and you'll have a handy place to hang your hammock in no time. 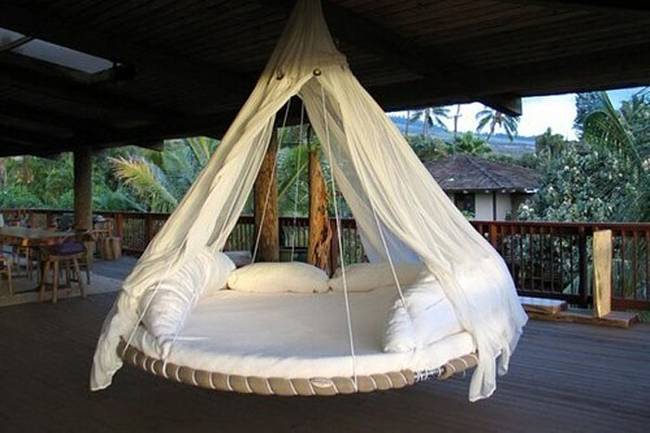 This Trampoline Hammock has Pinterest goals written all over it. It's the kind of thing that I would see in a movie or on a fancy design website and dream about for days on end, and now I know how to make my own. In this example it is hung in a covered porch like area, but if you don't have something like that, a sturdy tree branch would work just as well.

Once you have prepared the physical frame, this hammock isn't as hard to make as you might think. In my opinion, the real magic is in how you decorate it. It's those drapes and comfortable cushions that make it look so dreamy, and I can't think of a better place to spend hours slowly swinging away with a special someone, reading or simply watching the world go by. 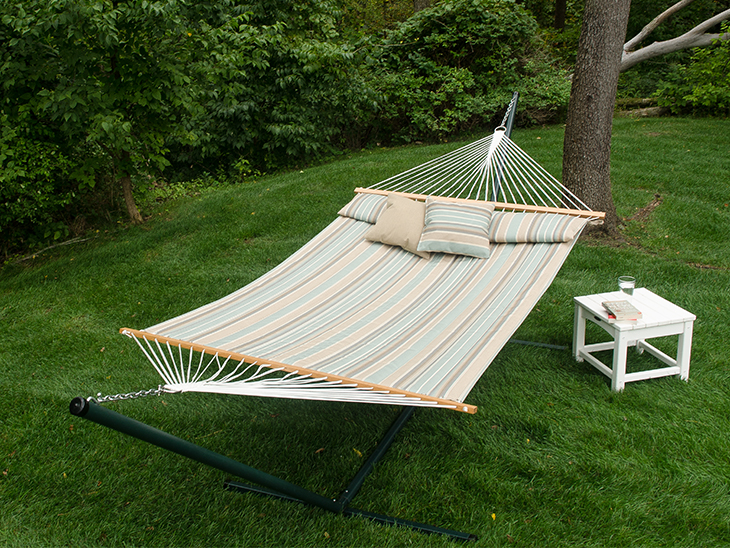 The wide, flat shape of this Sunbrella Hammock is different to most others I have seen, but I am a fan. Because it has wooden poles at either end this shape is maintained regardless of whether someone is lying on it or not. It would enable more than one person to lay on the hammock at once as well as stop you from sinking into it.

This specific hammock has a built-in, bulked up pillow area which I love as it adds a little bit of extra comfort. The neutral striped fabric is pretty and reminds me of beach days which is always a plus.

Previously being held back by the fact that my garden isn't the most hammock friendly environment, I am now more confident that I could find one amongst these DIY ideas to suit both my preferences and my space.

Although it is a bigger project, I am desperate to make the Trampoline Hammock, mostly because it looks like something that would come straight out of one of my dreams. I also like the look of the Beach Towel Hammock for multiple reasons, it reminds me of the beach, it looks simple to make, and I reckon I could find some incredibly fun patterned towels to play around with.

What material do you think makes the best hammock? Would you consider having a hammock indoors?