“We are surrounded by genius” -Janine Benyus.

Take a moment to slow down. Truly look at your surroundings. Breath in the oxygen that keeps us all alive, feel the security of gravity holding you in place. Now, look beyond what you know, and try to conceptualize the simple nothingness of space. The cold, the complete lack of control as you float through a space of no depth, realizing that the dots surrounding you are not on any horizon, but millions of light years away. There is no up or down here, just cold and space.

Within that extremely hostile environment, nature has managed to create amazing structures. The colors and life that abound on this small little rock are pure genius, and it is when you truly comprehend the environment in which life sprouted on Earth, that you begin to realize the true wonder of nature. It has overcome nearly all odds and, working as a system to survive and thrive for millions of years, gave birth to the reality around us.

What biomimicry seeks to do is emulate ‘nature’s genius’ and build structures that replicate what life has done for millions of years. Here is a quick look at six of my favorite inventions in biomimicry.

Cement is used everywhere in our construction. It is used as an essential ingredient in our sidewalks, buildings, and roads. This cement is also a big contributor to global warming, as its production is costly and dirty. It is estimated that roughly 5% of our excess carbon comes from producing cement. About 4 billion tons are produced globally, and all of this production releases an unhealthy amount of CO2 into our atmosphere.

What if we could completely reverse this? Multiple companies, such as Solidia Tech. and Colera, are experimenting with ways to build cement that actually absorbs harmful green-house gas emissions. This cement acts as a sponge, absorbing CO2 in order to harden. 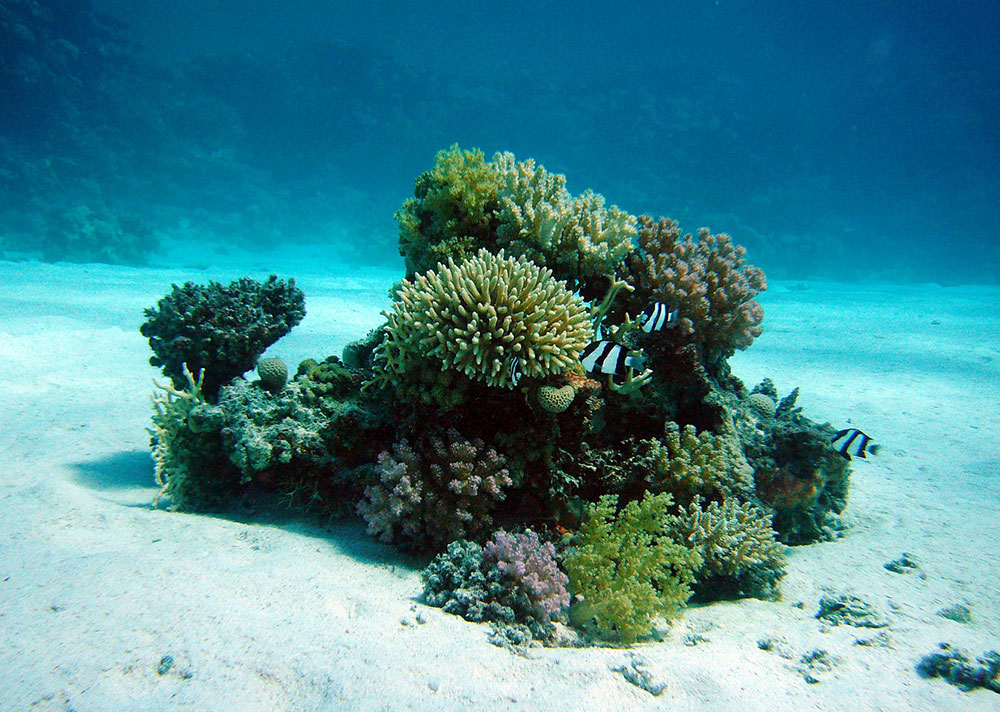 This technology was first discovered by studying ocean coral and its formation process. When coral forms, “it takes in minerals and CO2 and then secretes calcium carbonate to build its hard exoskeleton.” Seeing the phenomenon in nature, innovative minds began experimenting with this process in order to create their own carbon-loving concrete.

There are many companies making the dream of commercialized green cement possible. IronKast, for instance, has found a way to further green this process, by taking recycled materials from other industries (such as glass and iron) and form a material that hardens when exposed to carbon dioxide.

Photosynthesis is one of those amazing processes we couldn’t live without. Plants absorb sunlight, and the sugars, or chloroplasts, in their bodies convert the light into fuel that helps feed an entire tree. It is a self-sufficient process that is also self-regenerating. When the chloroplasts degrade, the leaf replenishes these fuel cells and repairs the damage.

Studying photosynthesis closely, scientists at MIT and Princeton have created their own solar panels based solely on photosynthesis. By emulating the curves and veins on leaves, these panels produce roughly 47% more electricity, all while being more resilient and flexible than the traditional rigid panels that line our roofs.

This research has also led to a breakthrough in self-repairing solar cells. By emulating leaves, we can build panels that contain “A hydrogel medium with embedded channels (that) allows rapid and uniform supply of photoactive reagents.” The solar cell would supply repair agents while it produced energy.

Access to clean water is not an easy task for a great deal of the population. As the planet warms and arid climates spread to previously fertile environments, providing clean drinking water to large populations will become a difficult necessity. Desalinization is an option, but as it rests now, it is currently very expensive and, you guessed it, has a huge carbon footprint.

A company called Aquaporin tackles this by simulating the very water filtering channels that exist in all life on Earth. From trees to bacteria to humans, aquaporin proteins filter countless liters of water in all living organisms.

The Aquaporin company has emulated this simple phenomenon by creating a membrane that works very similarly to our water-filtering proteins. This membrane can be used to filter chemicals from fresh water and can also be used to remove salt from ocean or sea water, providing arid climates with drinkable H2O.

HOW THE STENOCARA BEETLE CREATES WATER

Another option for arid climates is the Stenocara beetle. This beetle lives in one of the most arid environments on the planet, the Namib desert of southern Africa. When fog is formed from the morning sun hitting the cool, night-time air of the desert, the Stenocara lifts its wings to harvest water from the fog and dew.

How does this work? The surface of its wings has nanoscale bumps and grooves that collect water in the air. Once a droplet has formed, the beetle then directs the H2O towards its mouth. 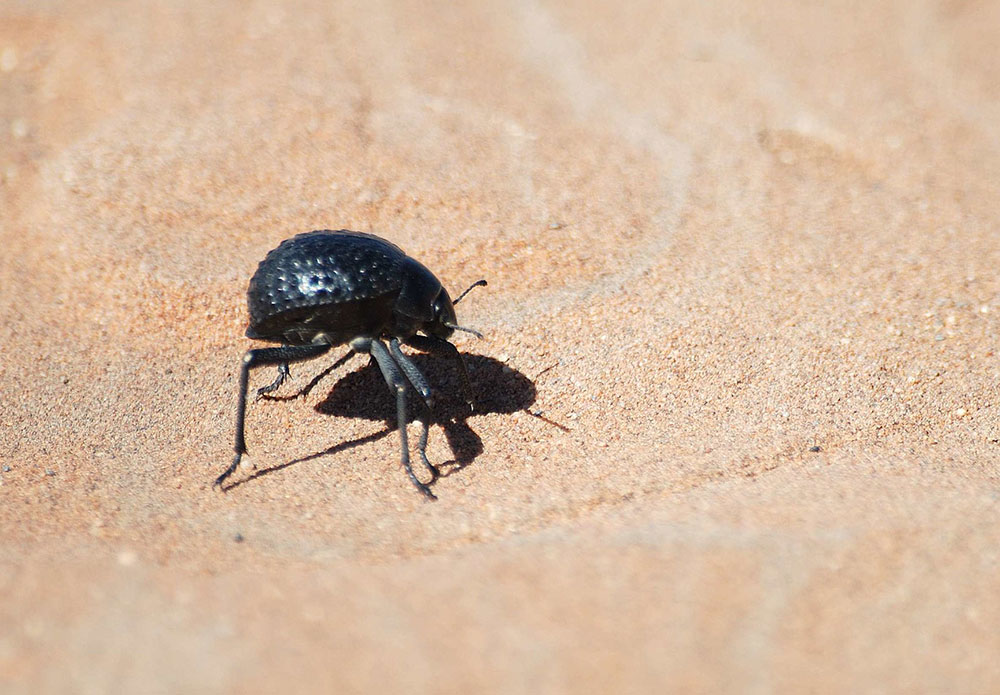 By studying this amazing little bug’s wings, scientists are experimenting with ways to develop a synthetic fabric that can do just that: collect clean water from morning dew or ocean fog in areas parched for clean drinking water.

HOW BEES AND ANTS GATHER FOOD

Ants and bees are fascinating. Operating in colonies of thousands, these creatures manage to communicate in a way that helps the entire group find and harvest energy efficiently. They have an almost seamless process of group interaction, something that innovative minds are trying to replicate.

They call this Swarm Technology. Swarm technology will be an essential part in building an entirely renewable electric grid. By emulating the way in which bees and ants communicate to find their food and flowers, scientists hope to recreate software that enables houses and other energy consumers to talk to one another via a stream-lined algorithm inspired by swarm communication. 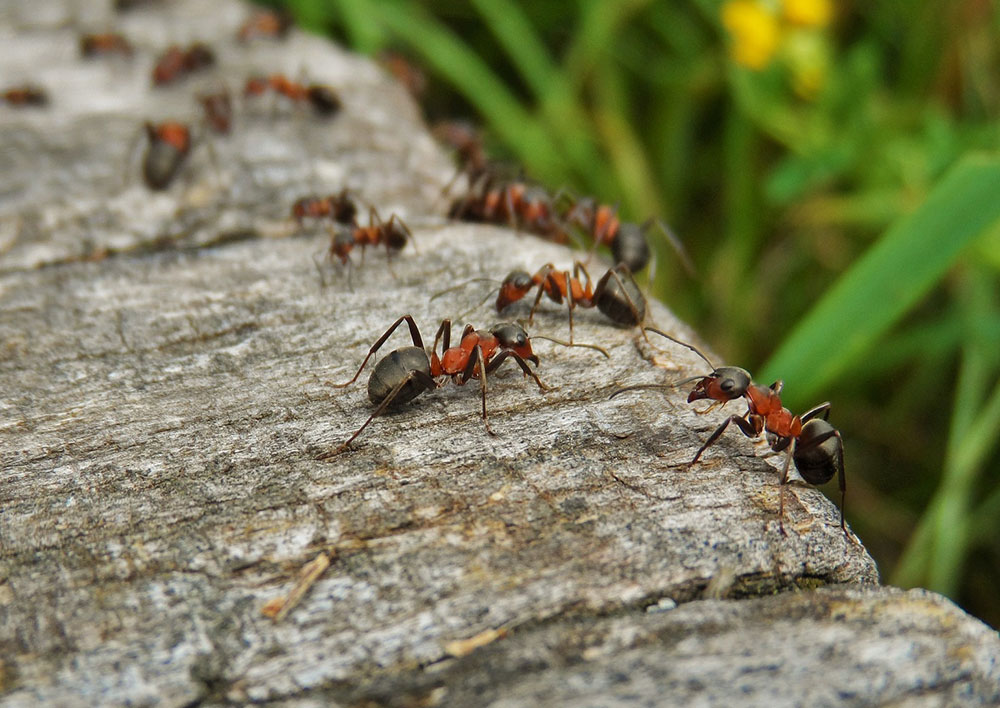 This would better direct surplus energy to sections of the grid that need it most and would store energy at low-demand times for future use. It is an essential part of the new Smart Grid, which will eventually power our modern lifestyle.

CONSTRUCTING BUILDINGS THAT COOL VIA CONVECTION BY STUDYING TERMITES

As the planet warms, cooling our buildings becomes more energy consuming. What if there was a way we could help cool our spaces via smart design?

Looking at termites can help us do just that. Termites are amazing builders, and although they are known for their destructive behaviors, they are also capable of some amazing feats of engineering. Their mounds in particular have become a focus of intense study.

In incredibly hot environments, termites have managed to build mounds that cool themselves via convection, utilizing air pockets and air streams that keep cool air moving throughout the mound. They build a central chimney that acts as the conveyer belt for the exchange of cold and hot air, creating a closed convection cycle that constantly cools the interior of the mound. If we could replicate this process with buildings, energy gobbling air conditioning would be a thing of the past.

There are a plethora of nature-inspired innovations out in the world. The Shinkansen, or bullet train, of Japan was designed by an avid bird watcher, who noticed the shape of the Kingfisher beak and head allowed for optimal air resistance at extremely high speeds.

If you take a moment to truly look, nature is astounding. Mother Earth has dreamt up some amazing contraptions in order to make sure life on this planet thrives. From the little proteins in all life that filter gallons of water, to the coral that absorbs CO2 to grow, humans can emulate some unique ways in which to battle climate change. After all, in order to live symbiotically with nature, should we not look to her for answers? She is the oldest expert.

Emily is a freelance writer based out of Minneapolis, Minnesota. She specializes in innovative renewable technologies with a focus on the growing climate change prevention movement. She grew up on a small organic farm in southern Minnesota, and returns often to her roots to find inspiration for her work. See more of her writing at Write to Revenue.