Cat Scratch Fever – What It Is, How You Get It And How You Prevent It - Homesteading Alliance

Cat Scratch Fever – What it is, How You Get It and How You Prevent It

Cat scratch fever can be a very serious condition, causing scarring and even blindness. In this post we'll discuss how your cat can carry the disease (and may not show symptoms), how you can catch it, symptoms of catch scratch disease, complications, treatment and why you don't want to let kitty lick your face.

Since my cats didn't come with an owner's manual, I didn't realize that cat scratch fever was anything other than a 70's song – until I found out that my sister-in-law had a case of it that was so bad it required surgery. At first I thought she had gotten scratched by the cat. (After all, it's called cat “scratch” fever, right?) It turns out that there was no scratch involved – all she did was let the cat lick her face and neck. She ended up with a bad infection in her neck that led to complications and an operation with a noticeable scar. (She is now fine.)

In another recent case, Janese Walters from Toledo, Ohio went blind in her left eye from being licked by her cat. CBS News quotes:

“I woke up one day and I couldn't see out of my left eye,” said Walters. “I looked in the mirror and I thought I had pink eye or something.”

After a month of inconclusive tests, doctors traced back the source of the infection to Walters' cat and a common bacteria known as Bartonella henselae, which causes a condition called “cat scratch” disease.

We've always had barn cats and indoor/outdoor cats who are allowed and encouraged to hunt, plus we all know that kitties lick their backsides, so I've never been big on letting kitties lick me. Recently we added a new cat to our home who loves to lick, so I thought I'd do a little more research on exactly what the risk is. My conclusion – don't let your cat lick your face, and washing hands after kitty licks elsewhere is probably a good idea.

How could my cat get cat scratch fever?

The Center for Disease Control states:

About 40% of cats carry B. henselae at some time in their lives, although most cats with this infection show NO signs of illness. Kittens younger than 1 year are more likely to have B. henselae infection and to spread the germ to people. Kittens are also more likely to scratch and bite while they play and learn how to attack prey.

Cats can get infected with B. henselae from flea bites and flea dirt (droppings) getting into their wounds. By scratching and biting at the fleas, cats pick up the infected flea dirt under their nails and between their teeth. Cats can also become infected by fighting with other cats that are infected.

Generally speaking, if your cat goes outside, it will have a higher chance of carrying the disease. (There are some natural flea and tick prevention options on the market.) That said, just because it's an indoor cat doesn't automatically mean it's safe.

How do I catch cat scratch fever?

The bacteria is transferred through saliva, which enters the body through open wounds – preexisting or caused by cat bites or scratches. Cat scratch fever can also be transmitted if the saliva touches the whites of your eyes. For instance, if kitty is licking your face or hand and you rub or touch your eye. An open pimple would also be another possible entry point. Bacteria are tiny and opportunistic.

If you've already been bitten or scratched, or have been licked near a wound or scab, wash the affected area thoroughly with soap and water. Cats generally don't get sick from the bacteria, so it's tough to tell if your cat may be a carrier.

What are the symptoms of cat scratch fever?

In rare cases, there can also be complications such as encephalopathy (may cause brain damage or death), neuroretinitis (inflammation of the optic nerve causing blurred vision), osteomyelitis (bacterial infection in the bones, possibly leading to amputation) and Parinaud’s Syndrome (looks like pinkeye, may require surgery to remove infection).

Most of the time, the infection will heal on its own. If an infection is severe, antibiotics or treatments of secondary conditions may be needed. Just pay attention to any broken skin contact with kitty, and watch out for the licking.

How to Keep Your Cat from Licking

Most of the time, kitty can be be distracted. Redirect your cat to another activity or relocate hands or face away from kitty's mouth. Eventually kitty will likely stick to mostly grooming him or herself. If you need additional tips, try the book, “Cat Training is Easy“, or stream some episodes of “My Cat from Hell” to gain some insight on managing difficult cats.

You may also enjoy: 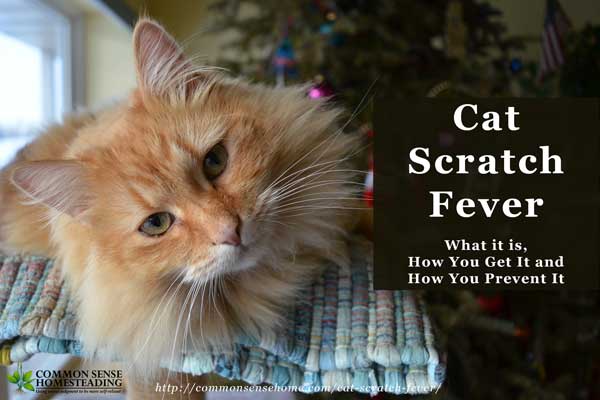 The post Cat Scratch Fever – What it is, How You Get It and How You Prevent It appeared first on Common Sense Homesteading.