Do you love the taste and health benefits of blueberries? Would you like a fruit crop that will produce well in a short amount of time and doesn’t require a lot of space? Have you tried growing blueberries and had poor results? This post is for you! Learn how to grow blueberries in your own backyard. We'll take you step by step through building proper blueberry soil, blueberry fertilizer and mulch, blueberry bush planting and care. We also touch on growing blueberries in containers, pruning and moving mature blueberry plants.

Where do blueberries grow?

You can grow blueberries in zones 3 through 10. A zone is a USDA Plant Hardiness Zone, but the local microclimate is just as important. Watch your local weather, talk with other gardeners, visit orchards and find out your real growing climate. For more information read: Plant Hardiness Zones and Microclimate – Creating Your Best Garden.

Blueberries grow best with an acid soil pH between 4 and 5.5, so do a soil test before you start. The best soil for blueberry plants is soil rich in acidic, organic material, like you would find on forest floor or edge of the forest. Peat moss is commonly recommended, but pine needles, leaves and other tree fallout (that may be available for free) work just as well. If your soil is alkaline, you’ll either need to do a LOT of soil amending or grow you blueberries in a container.

When you prepare your blueberry planting area, dig a generous amount of organic matter into your blueberry soil. Time and effort up front will make all the difference in plant performance. Watch out for large amounts of sulfur and other chemical additives, which may lower pH but disrupt the soil microbes. If you do add sulfur in quantity to lower pH, wait at least three months for it to break down before planting. (For instance, add in fall for planting in spring.)

The first time I planted blueberries, I used pine sawdust to kill the weeds, then used the sawdust for mulch. It worked OK, but I think the sawdust tied up a lot of nitrogen in the soil as it broke down, which slowed plant growth.

When I extended my blueberry patch, I first smothered the grass in a 10’x24′ plot with black plastic during the growing season. In the fall, I tilled in a generous amount of leaves and black peat by-product from Whitetail Organics earthworm casting production. (My nephew owns and operates Whitetail Organics.) I know my blueberry soil is acidic enough from the test I did before starting the plot.

Choosing Your Blueberry Plants – Which Blueberry Variety is Right for Your Area?

Different blueberry varieties can be grown from Texas to Canada. Check with your local Cooperative Extension office, or ask neighbors who have had success in growing blueberries. You can also check your favorite local or online nursery for suggested blueberry varieties. (Learn more about Plant Hardiness Zones here.)

I now have a 24’x40′ enclosure planted with three sugar sweet cherry bushes, four honey berries and a variety of blueberries. My northern highbush blueberry varieties include two Blue moon, two Blue Velvet, North Blue, Chippewa, and Blue bell, a high bush type not really for this area, but I have 3 of them started so I’m going to give them some time. 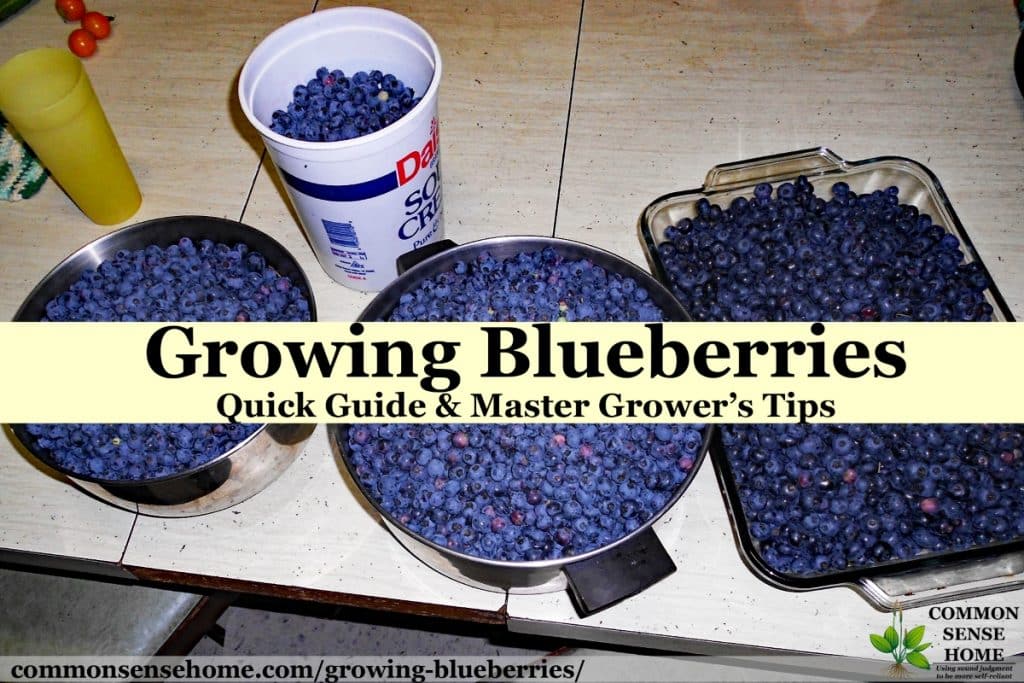 Prepare your soil before planting blueberries, as noted above. Plant container grown blueberry plants in your garden at the same depth they are growing in the pot. The same rule applies for bare root plants. Look for where the soil line was and plant the blueberries at the same depth they were growing before. The potted plants I planted blossomed and had fruit the first year. Bare root plants may take longer.

Where to Plant Blueberry Bushes

As noted above, blueberry plants prefer slightly acidic soil rich in organic matter. They need full sun for best fruit production, but will tolerate some afternoon shade. Avoid planting blueberries in ground that tends to have standing water or ground that dries out too quickly. Think “edge of forest”.

When to Plant Blueberry Bushes

Bareroot blueberry plants should be planted in early spring, preferably while they are still dormant, to minimize transplant shock.

Note: If you are purchasing container grown blueberries from an online nursery, they may need to be acclimated to your area before planting. Start with placing the containers in sheltered, shady spot outdoors, such as a porch. Keep them there for 3-4 hours the first day, bringing them inside at night. Add 1-2 hours of outside time each day, planting at the end of a week. Avoid exposing your young blueberry plants to freezing temperatures when they have fresh baby leaves. If frost threatens after planting, use frost protection.

Locally grown container blueberries that have been sitting outside at a nursery shouldn't need to be acclimated and can be planted directly in the garden.

The texts I have suggest fertilizing blueberries with 2 ounces of ammonium sulfate 18 inches from the plant when you see blossoms and increasing by an ounce each year up to 4 oz per plant per year. In years when organic mulches are applied increase the amount by 1/2. The ammonium sulfate will help acidify the soil. I’m currently gathering pine needles for mulch to keep the weeds down, which also helps to acidify the soil. Blueberries are a shallow rooted shrub and don’t compete well with grass, so they will really benefit from a good mulching.

One of the best discoveries I have made is how the blueberry plants respond to earthworm castings for fertilizer. My nephew gave me a 5 gallon pail in the fall and suggested I use it for the blueberries. Since its low nitrogen I figured it would be OK, but it triggered a growth spurt and even a few blossoms in October.

How to Fertilize Blueberries the Right Way 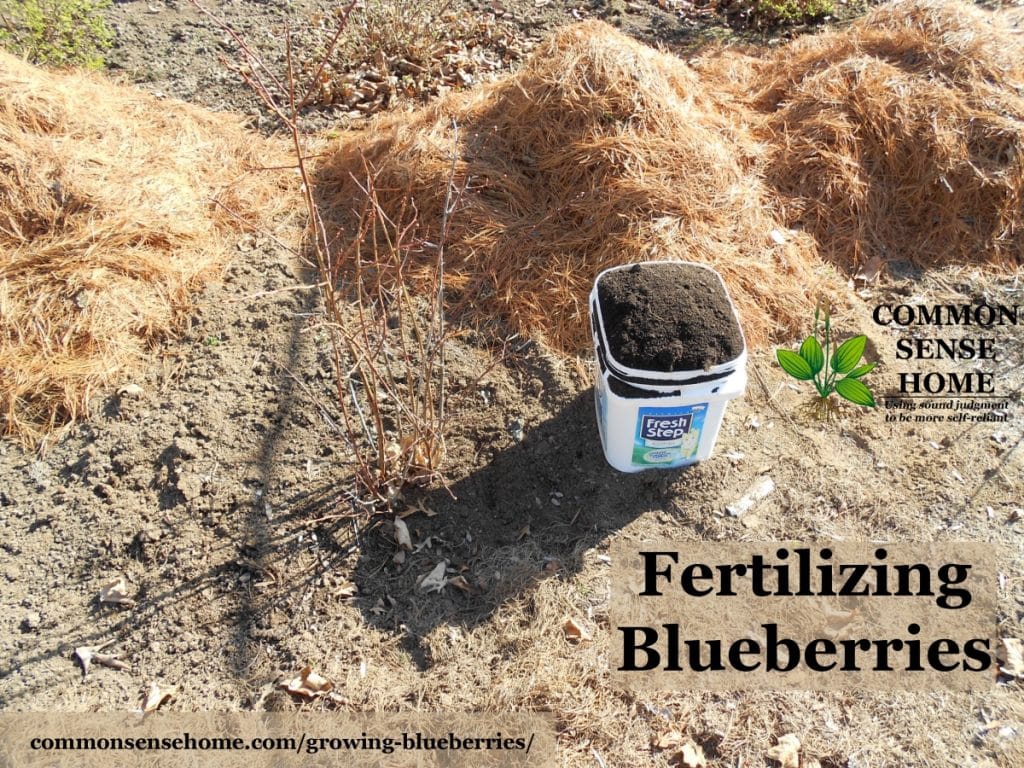 A good layer of mulch will help keep up the moisture level stable, and cut down on the amount of time spent watering. I would say the best blueberry mulch is pine needles. As they decay they will continue to supply nutrients and help maintain the correct pH.

If you can’t get pine needles, bark or wood chips over wet newspaper would be my next choice, although I haven’t tried it. Each spring, I would suggest pulling up the mulch and adding organic material such as compost or castings around the base of the blueberry plant to keep the ground healthy. Spring is the best time to add blueberry fertilizer, as noted above.

Healthy soil = healthy plants. Plants in the healthiest soil will produce the healthiest berries. Remember, these bushes have the potential to provide many years of delicious berries, so they are worth the extra effort. 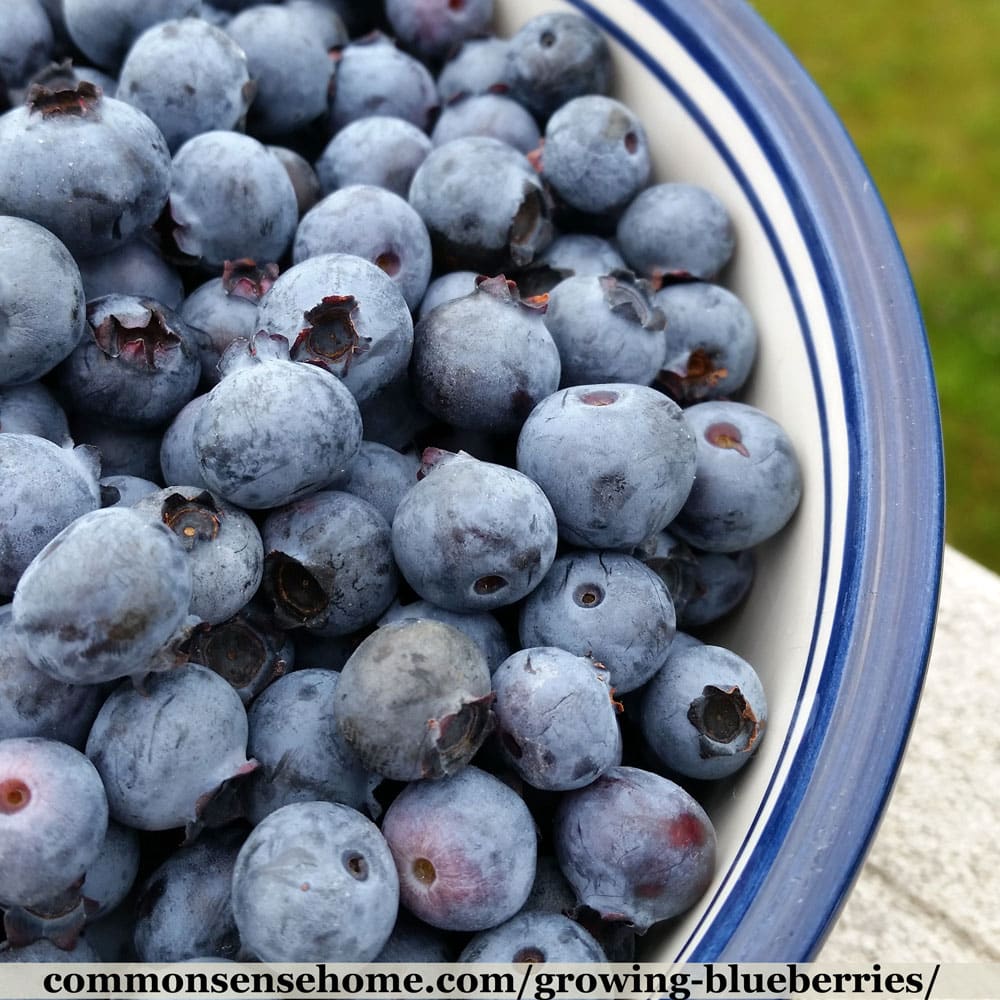 Learning how to care for blueberries is fairly straightforward. Once you prep the soil, fertilizer and mulch, the main thing to watch during the growing season is watering. Blueberries need around an inch of water per week, and water is extra important when the berries are growing. Blueberry bushes set fruit next year on this year's growth, so you want to make sure to care for your blueberry plants well throughout the season.

Blueberry Care – Protecting Blueberry Plants for Birds and Other Animals

The first problem I ran into with blue berries is that every wild animal eats them, and not just the berries. They started with the newly planted bushes. First the deer came to browse and then the rabbits, and the first 6 plants I put in turned into 2 inch stubs.

I fenced the next planting with 3 foot wire, but I still had problems with the deer jumping the fence, so last year I went to a 6 1/2 ft fence. To keep the birds out I built a frame work out of T post, chicken wire, tube steel and conduit, then ran wires to support plastic bird netting. This created safe haven for the plants to grow and berries to ripen pest free. Having the netting elevated instead of just draped over the plants provides better protection and makes the plants easier to access for harvest and care. 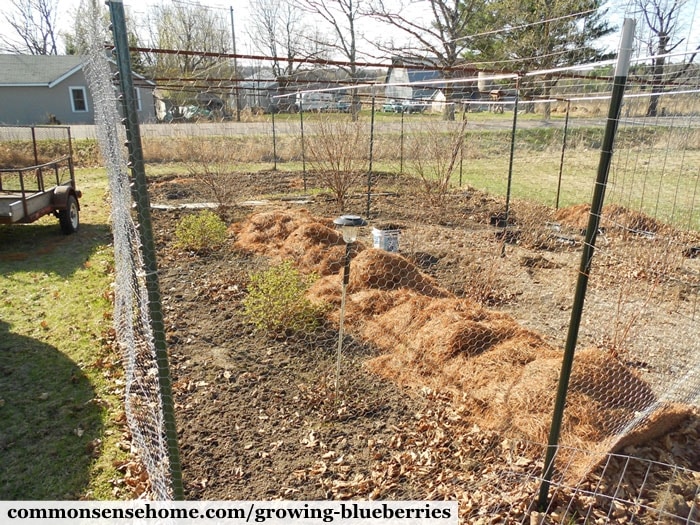 I know there are products to repel deer and rabbits but I'm not convinced in their effectiveness. Same with different tactics to repel hungry birds – nothing is going to be as effective as a physical fence. When you price fencing materials they may seem expensive, but remember a blueberry planting can last 30 years if you manage it properly, so it will be worth it in the long term.

Because containers do not provide adequate insulation from the cold, be sure to protect container-grown blueberries during the winter to prevent root damage. In mid- to late October, bury containers in the ground at a site where snow is likely to accumulate and where plants will be protected from cold winter winds. Mulch the soil surface with four to eight inches of straw in mid-November or cover the bushes with burlap. Prevent rabbit damage by placing chicken wire fencing or hardware cloth around the bushes. During early to mid-spring, remove containers from the ground and place them in full sun. Alternatively, containers can be left buried in the soil as long as the containers have proper drainage holes and the site where the containers are buried is well drained and exposed to full sun.

How to Plant Blueberries in Pots

Additional information on growing blueberries in containers, including overwintering, can be found at: Growing Blueberries in Containers by Vijai Pandian, UW-Extension Brown County and Rebecca Harbut, UW-Madison Horticulture.

How to Prune Blueberries

“Remove the low growth that would touch the ground when loaded with fruit. Cut out short, soft shoots that develop from the base of the plant late in the season.

Prune off canes and twigs damaged by winter injury, mechanical causes, diseases or insects. Cut out the unproductive canes: those that haven't produced much new growth on one-year-old canes, which have buds and are dull in color.

If you have been pruning every year, it is best to remove the two oldest (most unproductive) canes each winter.

Prune to let light down into the plant center.

If your plants tend to overbear, with numerous small fruits rather than larger ones, thin the fruit buds by clipping back some of the small shoots carrying a heavy load of flower buds. Blueberry flower buds are near the tips of the past season's growth and are large and plump, compared to the small scale-like “leaf” buds.”

How to Transplant Mature Blueberry Plants

Yes, you can transplant mature blueberry bushes. It’s best done in late winter or early spring. This is a pretty good guide, although I would try to give the sulfur a longer rest period before planting. http://www.gardenguides.com/112707-transplant-mature-blueberry-bush.html.

How to Clone Blueberries from Mature Plants

See http://homeguides.sfgate.com/graft-clone-blueberries-73089.html for instructions on cloning your own blueberry plants.

This post is by Laurie Neverman’s brother, Richard Poplawski. Since his service in the Marines, Rich has been a mechanic, fabricator and “fix just about anything” guy for over 20 years. He lives in northwest Wisconsin in the farmhouse that was owned by his grandparents, and maintains a large orchard and perennial plantings, as well as a vegetable garden. He loves spending time with his grandkids, introducing them to gardening or getting in some fishing with “Papa Rich”.

His posts on the site include: