Growing Leeks: The Complete Guide To Plant, Grow, And Harves

Leeks are a member of Allium genus that I think belongs in every garden as a mellower, sweeter alternative to its cousin the onion. Growing leeks requires a bit more patience than other vegetables, but the payoff is well worth it. After all, there's a reason these plants fetch a relatively high price at the grocery store.

There’s some misconception that growing leeks is a tough job. That’s really not the case. The plants have few problems and aren’t particularly fussy. The biggest challenge is providing them with enough growing time to reach maturity. It’s why planning is essential when growing leeks.

Starting seedlings indoors ensures you’ll set those plants out early enough to give them time to grow uninterrupted. These are not the plant for the spontaneous gardener who does everything at the last minute. Otherwise, leeks are an excellent option for newbie gardeners with time on their hands.

Like anything else grown in the garden, fresh and homegrown veggies beat tasteless grocery produce. Leeks are no exception. While some folks complain that the white petioles of their homegrown leeks aren’t large enough to be satisfying, there are some ways to ensure you end up with the best-tasting leeks on the block. Our growing guide for this onion-like veggie consists of everything you need to know to succeed. 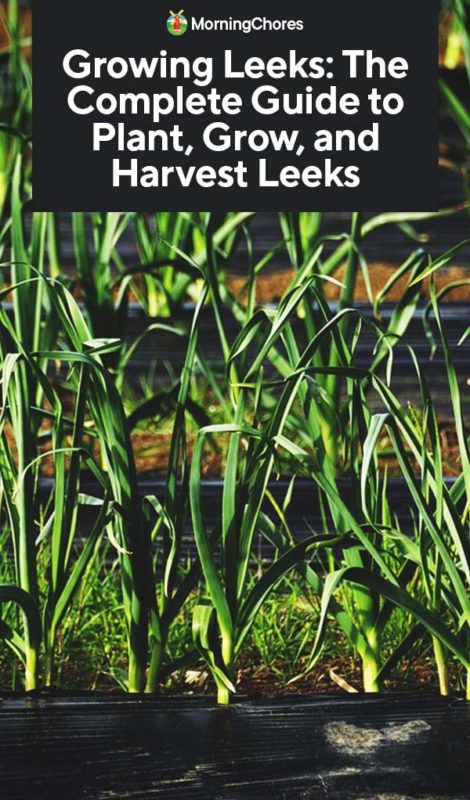 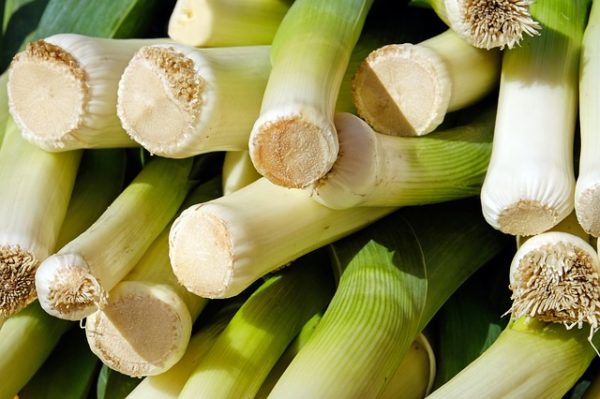 Wondering which types of leek varieties to plant? Here are some popular options and their advantages: 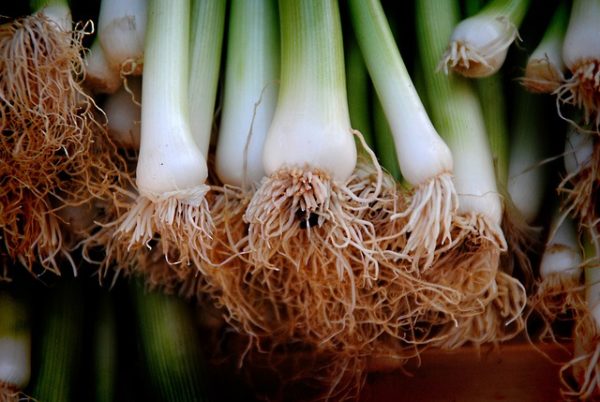 Now that you've picked a variety, you're ready to start your journey into the world of growing leeks.

When to Plant Leeks

In a cold climate like mine, you’ll need to start leeks indoors way before the last frost, because they require such a long growing period. Start seedlings indoors in February or as late as March to ensure that they have 6 to 8 weeks to grow before planting.

In fall, start indoors 8 to 10 weeks before the first frost date.

In warmer climates, you can direct sow leeks.

Remember, most leek varieties take a long time to mature. With plants like these, I always plan cautiously and expect things to take slightly longer than expected. Some types may take more than four months to mature.

If you still want to enjoy leeks but aren’t able to provide them with a suitable long growth period in ideal conditions, try short-season leeks, which mature quicker than their long-season siblings.

Where to Plant Leeks

Leeks prefer cool or cold conditions. They do well in cooler climates where the summers aren’t too hot.

Leeks are a cool-season vegetable, so you won’t need heat mats like you would with eggplant or tomatoes. Seeds should have no trouble germinating even if the soil is slightly cooler. Seeds take a little longer to sprout than others but should take at most two weeks to germinate.

Transplanting should happen in the early spring. In my area, that’s around the time the soil begins to warm up. Leeks should be at least 6-inches tall prior to transplanting. When it’s time to set them out into the garden, transplant the biggest starts first for an extended harvest.

Harden them off for about a week when transplanting. When putting leeks in the ground, it’s crucial to cover the plant up to its leaves to encourage blanching, which we'll talk about more in a bit.

These white-stemmed plants need full sun to grow – at least 8 hours a day.

The perfect soil conditions for growing leeks involves a pH between 5.5 and 7. You should work a good quality compost into the soil before transplanting, and give leeks fertile, well-drained soil. That said, leeks aren’t terribly finicky regarding the type of soil they’re grown in. Leeks are best planted in beds, raised or in-ground.

I’m a square foot gardener, so I plant leeks 9 per square foot. Remember that you’ll get a single leek from one seed, so you’ll need to plan to plant multiple for a sizeable harvest. For row gardeners, plan to space leeks 6-inches apart with 24-inches between rows.

Caring for your Leek Plants

Keep growing leeks well-watered throughout the season. Periods of drought may prevent full bulb formation. Soak growing leeks at a depth of 18-inches at least once a week.

Plant leeks in soil that has been amended with compost. Leeks are heavy feeders, so throughout the growing season, side-feed with nitrogen fertilizer.

You may cut some of the above-ground leaves of the leek plant to encourage the growth of the bulb. 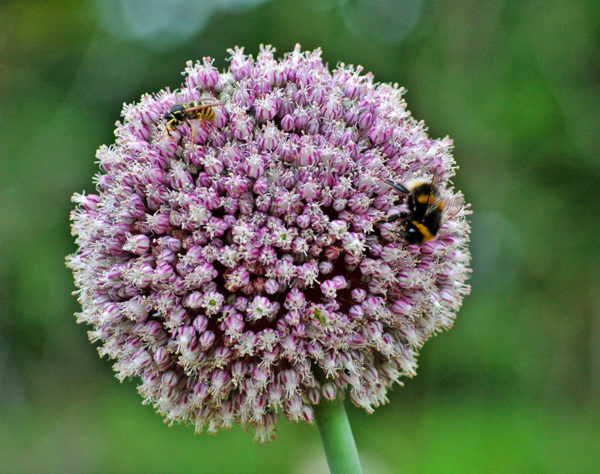 Don’t plant where you recently grew onions or garlic.

Start seeds at different times so you can harvest leeks at different intervals. If your growing season isn’t too short, you may be able to get away with a mid-summer planting. You can also pick leeks before they are fully mature and use them like you would a green onion.

Don’t forget to cover the bulb regularly to encourage blanching of the growing leek root. This white part of the stem is the portion that has the best flavor.

Throughout the growing season, you’ll need to hill up dirt around the plants two or three times, going a little bit higher each time. This forces the leaves to stretch higher, increasing the edible white portion. Mastering this technique is the key to growing leeks with large white portions.

Some people plant leeks similarly to potatoes by placing them in trenches. I prefer to hill as the season progresses.

Problems and Solutions for Growing Leeks 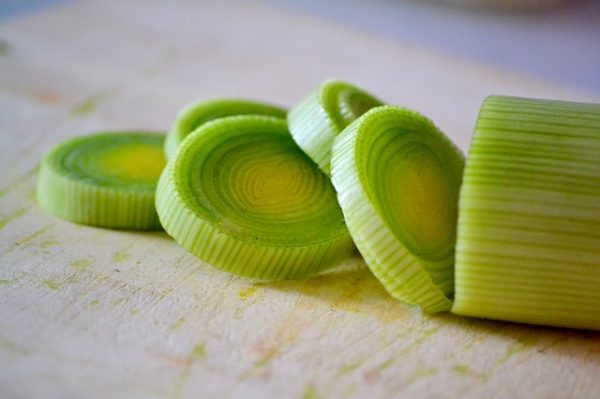 Thrips are little insects that target the leaves and stems of growing leek plants. They may not cause your plant to die over completely, but they can spread disease, which may eventually kill your plant.

Another potential foe of leeks is the root maggot, which damages the bulbs and leaves them inedible. Use row covers and be sure to rotate your crops regularly to prevent the larva from taking up residence in your garden.

The leek moth targets this vegetable specifically. It eats the leaves and bores into the stems of leeks. Prevent these pests using a row cover and using proper crop rotation practices.

Rust is a fungal condition that causes leek leaves to turn brown. The disease, at its worst, may cause the plant to grow slowly or stop growing altogether.

White Rot is a potentially devastating condition that affects the entire leek plant. Both the leaves and root start to deteriorate, usually beginning in mid-summer. Once it impacts your plants, you usually can't eradicate it, so it's best to prevent it in the first place. Rotate crops, solarize soil that has been previously impacted and use clean tools to avoid spreading it.

Prevent your seeds from damping off by using sterile potting mix, clean your pots before using them and don't crowd seedlings. You can also place a thin layer of gravel or sand on the top of the soil. Be sure not to overwater seedlings.

Botrytis leaf blight impacts plants in the onion family. You'll notice elongated white spots on older leaves at first. The greens will then become necrotic and dieback. Ensure your plants have good drainage and plenty of space. Don't apply fertilizer late in the season. Remove any infected plants and burn them.

As the name implies, plants that contract this infection will have their roots turn pink. It doesn't usually kill plants, but you can control it by rotating your crops and don't plant leeks where you had cereals growing the previous season. Solarize your soil if your plants contract pink root.

This fungus causes irregular lesions that eventually develop a downy coating on leaves. It can spread quickly through wind or rain splash, and it can survive in the soil for years. Rotate your crops and use a copper spray to control if you see this popping up on your leeks.

This disease is common in warm, humid regions. It's caused by a fungus that causes lesions on leaves that eventually turn purple or brown. Space plants appropriately and don't water overhead or late in the day. Rotate your crops and till your soil every fall. This often goes hand-in-hand with onion thrips, so make sure to keep them away from your plants.

The allium leaf miner loves to nibble on anything in the onion family. Cover your growing leeks in fine mesh netting during the leafminer egg-laying season, which is typically from March until late April, and again in October and November. Or you can grow plants indoors until laying season has passed.

Here are the best and worst plants to place right next to your leeks. All these are suitable friends for your leek plants, but carrots win out. Growing leeks near your carrot patch will help deter certain carrot-loving pests. 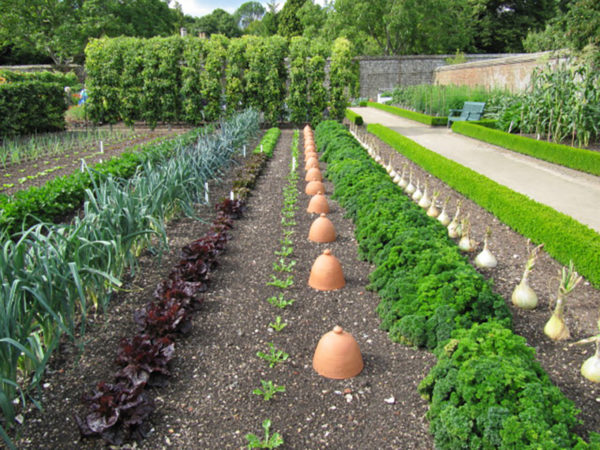 Why are these the worst companions? They’re hungry feeders and will sap the nutrition from the soil leaving your leeks starving. 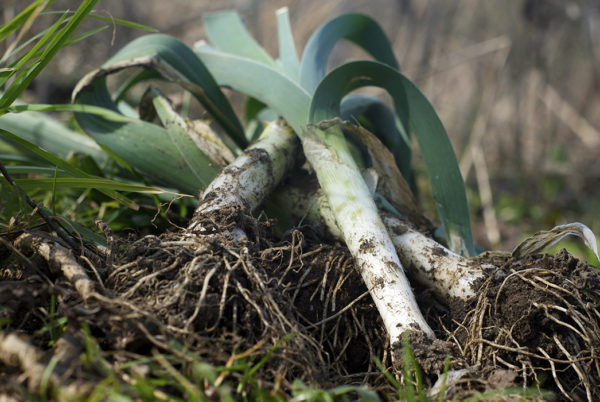 Harvesting: Leeks are ready for harvesting long after you’ve started them, so be patient. Harvest when the bulbs are at least 1-inch in diameter. You can wait until the bulb is larger, but don’t wait until the ground is frozen or you won’t be able to pull your leeks from the earth. Leeks should be harvested before the first frost. In warmer climates, leeks can be overwintered.

In general, leeks need 100 to 120 days to mature from transplanting, but some varieties may be ready in 75 days.

Storage: Leeks do well stored in the fridge. I’ve had good experiences keeping them in there for weeks at a time. I wrap unwashed plants in perforated leftover plastic bags and keep them on the bottom shelf. I’ve never had a leek go bad!

You can also freeze leeks, but blanch them first for a few minutes. This will compromise some of the flavor and texture, but it's a good alternative to throwing uneaten plants out. 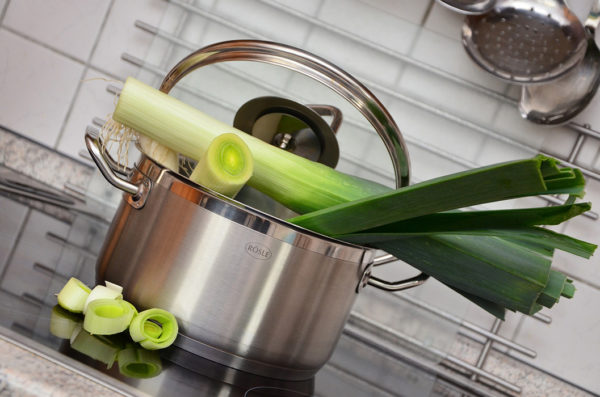 I love using leeks when I cook. I often use them in place of onion for a different flavor note. They’re great in soups and stews. One of my favorite ways to use leek is cooking au-gratin (meaning, with cheese) mixed with shredded carrot. My second favorite way is in empanadas.

You can use leeks anywhere you would use onions. They make a particularly excellent addition to quiche.

Don't forget the green part of the plant. Even though most recipes call for the white bit, you can eat the greens as well. They tend to be tougher and less flavorful, so cook them well. Also note that if your leek flowers, you can eat the scapes.

This vegetarian white bean and leek chili recipe will have everyone in your family begging for a second helping of veggies. 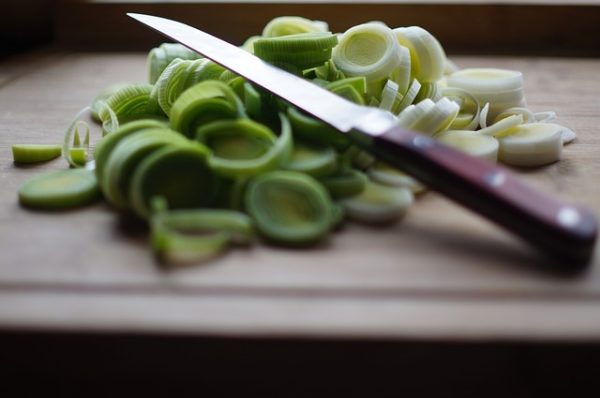 Heat the butter in a large pot over medium-low heat. Add leeks leaks and garlic and cook until softened. Add carrots and potatoes, cook for 3 minutes. Stir in corn, peppers, and beans. Sprinkle in the cumin, oregano, coriander, and 2 teaspoons salt. Add 4 cups of water and bring everything to a boil.

Reduce heat and simmer for 35 minutes. Finish with the rest of the salt, some pepper to taste and dollop each bowl with sour cream and cilantro.

Do you have a favorite leek recipe? Let us know in the comments!