Is This Iconic Winchester Model The Best Hunting Weapon You Can Own? - Homesteading Alliance

Is This Iconic Winchester Model The Best Hunting Weapon You Can Own?

The Winchester Model 70 is widely regarded as one of the most classic hunting rifles of all time.

So the question, then, is this: Is the Winchester Model 70 still a valuable hunting rifle worth owning today? Should you search for a good quality pre-64 Model 70, or are post-64 Model 70s – at close to $1,000 — worth buying?

The Winchester Model 70 quickly gained a reputation for being a well-built rifle. Winchester had adapted many of the design features from the highly successful and highly regarded Mauser rifles. This Winchester Model is known for being accurate, reliable and being able to stand up to harsh conditions, it is also offered in an extremely wide variety of rifle calibers.

The highest-quality Winchester Model 70 rifles were manufactured between 1936 and 1964. The non-rotating claw extractor of the Mauser rifles was adapted, meaning the extractor would catch the round of the cartridge in the magazine and then feed it into the barrel when the barrel was pulled back and pushed forward. This led to increased reliability, and this same feature is utilized by many bolt action hunting rifles today. Some even considered the Winchester to be a superior weapon to the Mauser rifles from which it was based.

Winchester’s main competitor turned out to be Remington, which manufactured the Model 700 in large numbers. The Remington 700 is the most popular hunting rifle today, but many still regard the pre-64 Model 70 as being a superior weapon. Each Model 70 was hand crafted in the factory, and since so much precision and effort was put into making each one. The price of the Model 70 rifles were very high.

How To Hide Your Guns, And Other Off-Grid Caches…

In comparison, Remington stamped their Model 700s together. The Model 700 didn’t have quite the quality of the Model 70, but they were still considerably cheaper. Many people were drawn to the Remington because it worked and it was affordable.

It eventually got to the point where Winchester couldn’t keep up with the low price of the 700. As a result, Winchester made numerous design changes to the Model 70 after 1964 in order to make the rifle more affordable … but many people believed that these changes had lowered the Model 70’s quality. 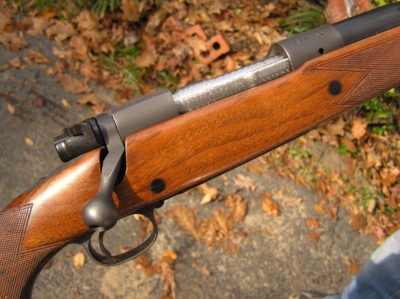 Throughout the years, sales of the Winchester Model 70 continued to spiral. People were more likely to get their hands on the high-end pre-64 model rather than the post-64 rifles that were being produced. Winchester finally closed their plant in 2006 after having turned their business over to U.S Repeating Arms in the 1980s. As a result, sales of Winchester rifles and shotguns, such as the Model 1300 shotgun and 1894 lever-action rifle, came to an end. And with it, came the end of the Winchester Model 70.

That changed in 2007, when FN announced that they would manufacture Model 70 rifles under the Winchester name in South Carolina. In 2013, FN moved production of the Model 70 rifles to Portugal to save on costs of producing the rifle. The SXP shotgun and the 1894 lever action model are still produced today. The 1894 is also the most popular lever-action rifle of all time. The newer Model 70s have gained a reputation of being a solid hunting rifle. It is of better quality than the other post-64s, but still not quite up to the standards of the pre-64.

The Winchester Model 70 is an American icon. If you own a pre-64 Model 70 it is sure to be a treasure in your gun collection. But the new Model 70s are a solid hunting rifle, and while there are many other quality options out there — from Remington, Ruger, Tikka and Sako — the Winchester Model 70 is perhaps the most classic and valuable rifle on the market. It has rightly earned the nickname of being “the Rifleman’s Rifle.”

Do you agree or disagree? Is the post-64 Winchester Model 70 worth owning? Leave your reply in the section below:

The post Is This Iconic Winchester Model The Best Hunting Weapon You Can Own? appeared first on Off The Grid News.