But you probably already knew that, huh?

I’ve never been one of the cool moms…

We don’t all have matching outfits for Christmas pix. (Heck, I haven’t even done a Christmas CARD in the last 5 years…)

I couldn’t plan a themed birthday party if my life depended on it.

Fun snacks? Um, I think there’s a shriveled up string cheese in the fridge if you’re dying.

Are you picking up what I’m putting down here?

So I couldn’t help but scratch my head when recently, the random photos I’ve been posting of our kids on Instagram have been getting a lot of engagement–even more engagement than my cute cow photos (which is saying a lot). 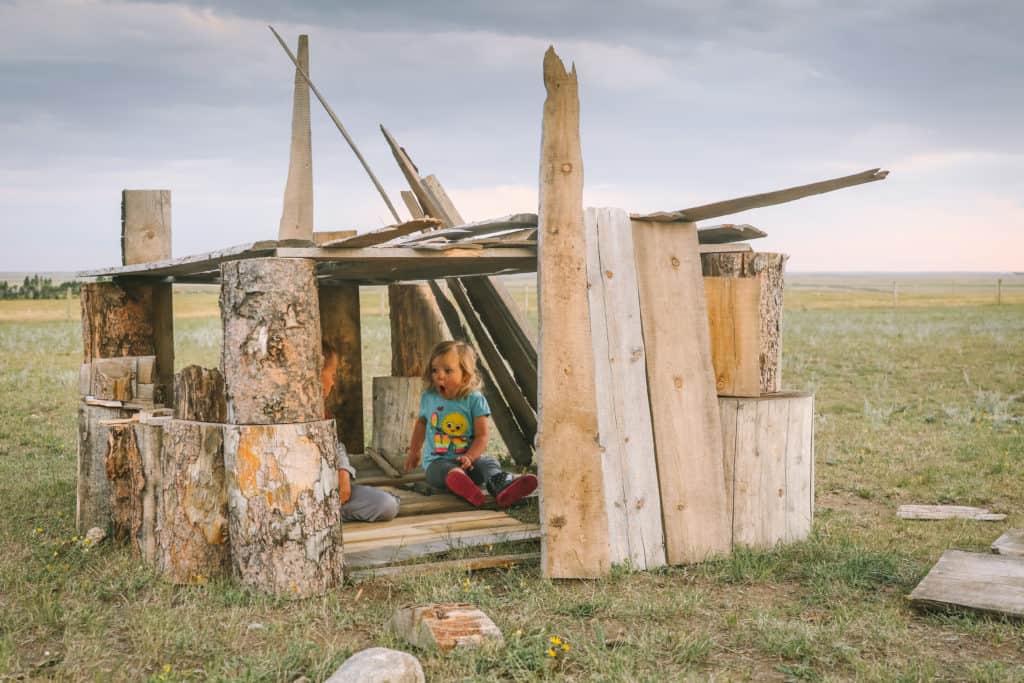 There was the photo of the kids sitting in their homemade pasture fort made from scraps of lumber from the wood pile. 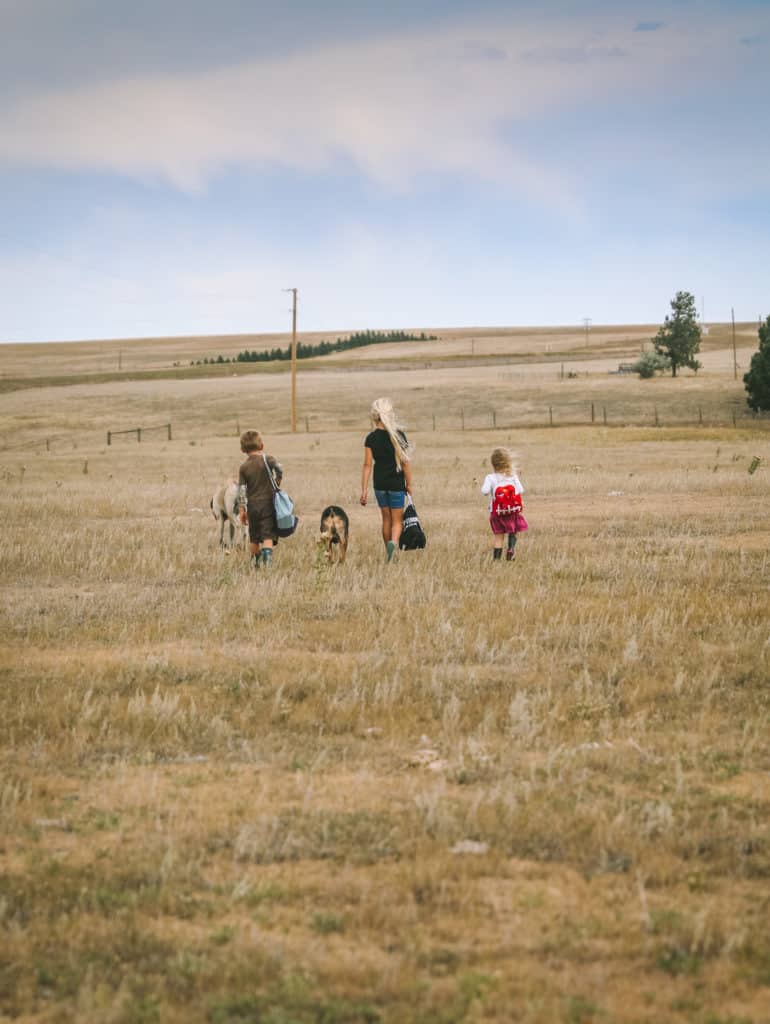 The photo of the Three Amigos heading out to the pasture with their sack lunch. 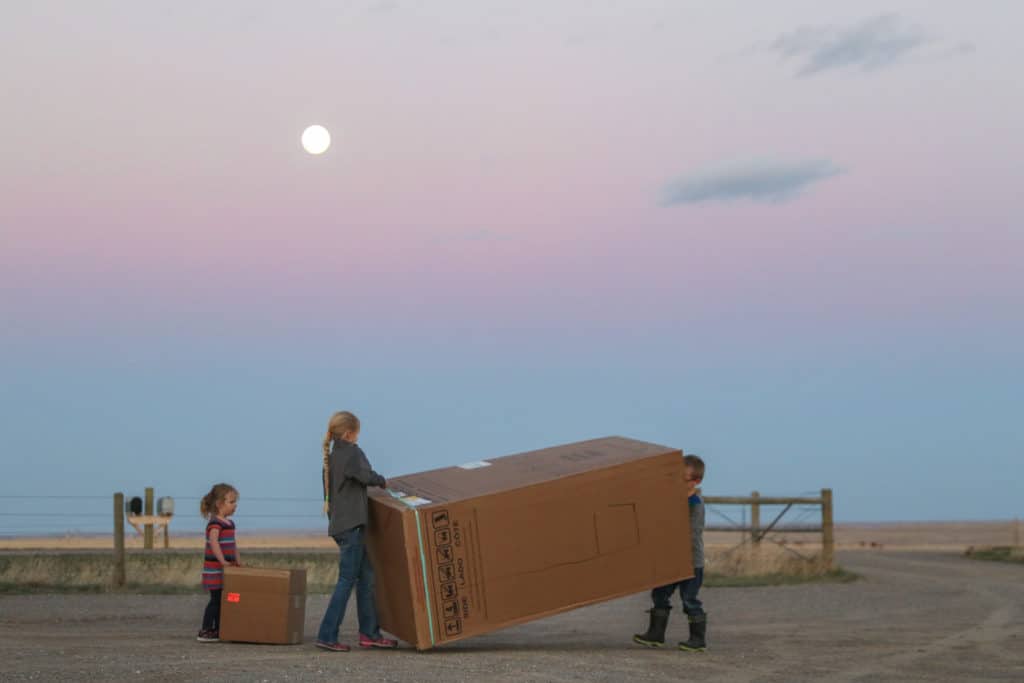 And the photo of Mesa and Bridger toting off a refrigerator box to be turned into a covered wagon, then a cabin, and then a rocket.

The comments, messages, and likes I’ve received on these posts have made me think it’s time to dig into this (apparently radical) notion a little deeper.

Let me just start by saying I didn’t start doing any of this on purpose.

When Christian and I bought our homestead property in 2008, we were excited at the thought of raising our future children here, but I had absolutely no preconceived notions of what that would look like.

The kids have always come along with us, no matter what we doing. Not because we had some grand parenting philosophy guiding us, but rather because there’s a serious shortage of babysitters out here. And we have busy lives with a lot of moving parts, so it just made sense to pack the kids along with us, almost always. 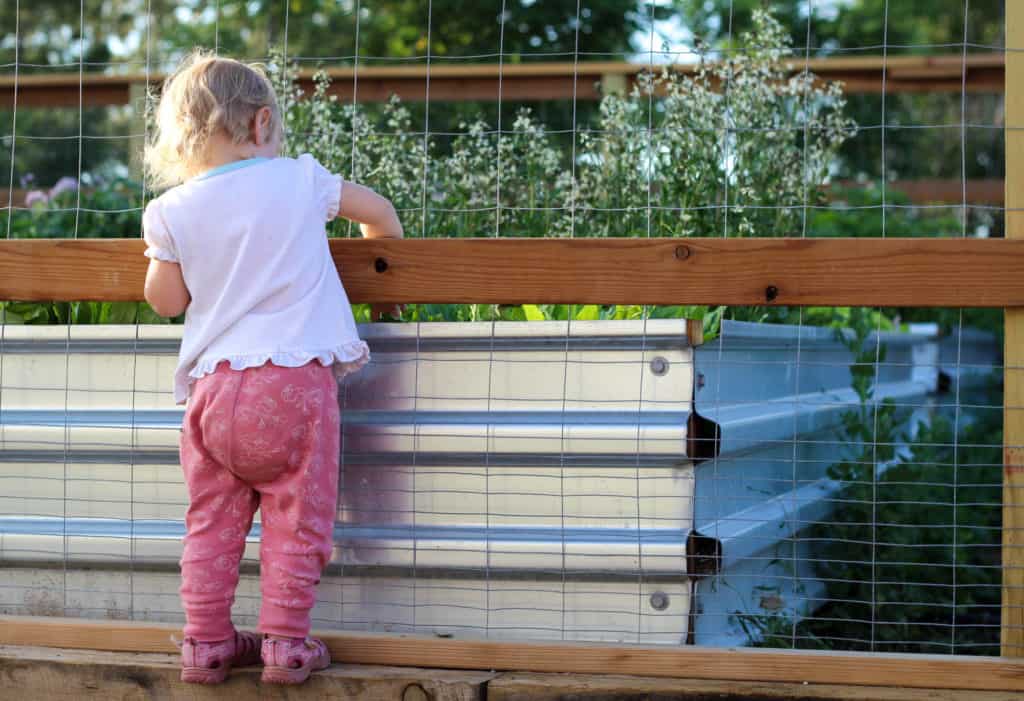 As Mesa (our firstborn) grew, we just did what felt natural. When I’d milk, I’d bundle her up and she’d toddle along. When I’d ride my horse in the summer, I’d stick her in her playpen in the shady barn and let her nap. Bridger (our middle child) was snuggled into our tattered jogging stroller at 5-days old so he could accompany me to the barn to check on things. And Sage (our thirdborn) has been doing everything she can to keep up with her farm-raised siblings almost since the day she came out of the womb.

It was a lot of work at the beginning (putting on tiny mittens and boots x3 is tedious by any standard), but as they’ve grown, they’ve taking on more responsibility and have become pretty darn capable, if I do say so myself.

Mesa (9) and Bridger (6) do barn chores by themselves (unsupervised) each morning. They fill water, feed the chickens, check for eggs, move the horses, and feed the cats. 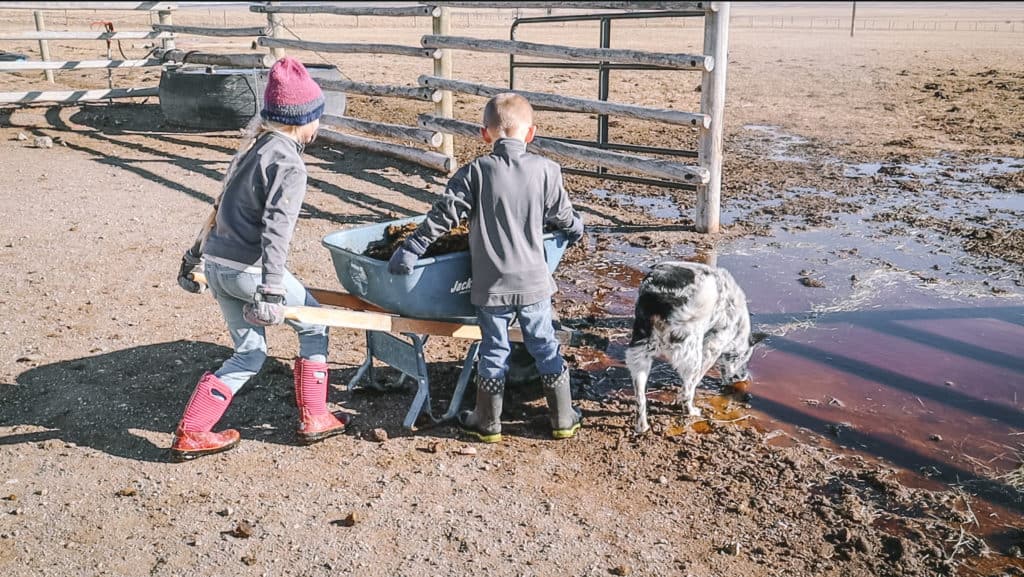 They can do almost all of the watering chores in the summer, pick vegetables for me in the garden, and scoop poop out of the barn (I still have to help them dump the wheelbarrow if it’s heavy, but no complaints here.)

They have responsibilities, and I’m a stickler for starting our homeschool routine by 8am each morning, but once school and chores are done, their day is mostly their own.

Boots are shoved on feet, and off they go with a hurried “Bye mom!”

And the house is suddenly quiet.

Outside, they run and scream. They ride bikes and throw balls. They poke sticks in the big water tank and pretend they are fishing. They climb on the hay bales and slide down the sides. They coerce the barn cats from their hiding spots and cuddle them until they melt in their arms. They pile up logs and bits of scrap wood to make wagons and forts and houses. They pretend with hammers, sticks, and shovels. They visit the cows in the pasture and scratch the goats. They embark on grand adventures behind house, weaving in and out of the tree rows. They collect rocks and birds nests and random treasures. They wade in the giant pasture mud puddle after a rain and utterly cake themselves in mud. 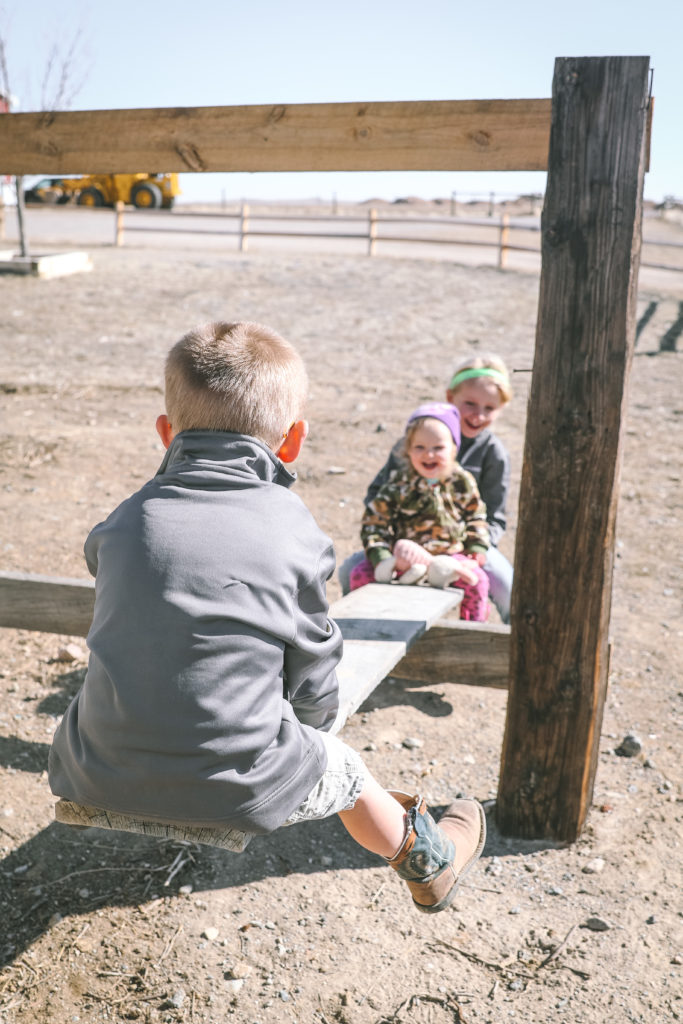 When I call them in for supper, they tend to be absolutely filthy, exhausted, and completely content.

Living 35+ miles from town has seriously limited the amount of playdates or structured kid activities we’ve been able to partake in thus far. And if I’m being honest, that used to bother me. A lot. I worried I was doing my kids a disservice by not driving them to all the lessons and Mommy and Me activities…

But I’m starting to realize the sort of unstructured childhood we implement here on the homestead, not because it was trendy, but rather because it was the only natural option, is actually a thing. 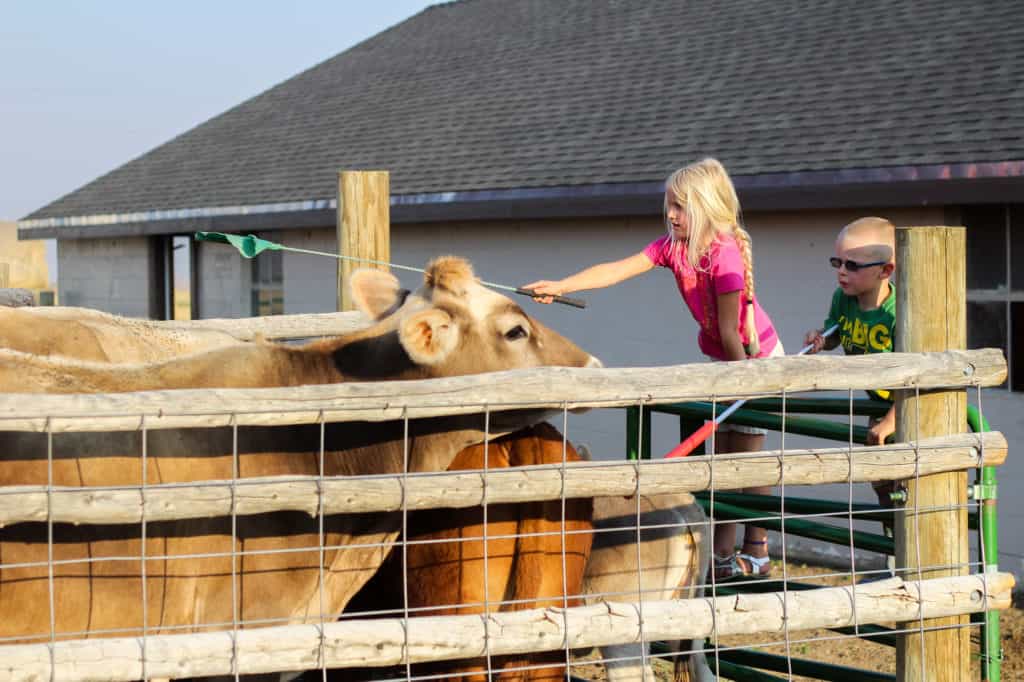 I’ve been absolutely fascinated with all the articles I’ve seen floating around lately with scientific “proof” of an old-fashioned childhood (even though they don’t call it that). Our grandparent’s generation never even thought to question these things, but here we are in 2019 having such revelations such as:

It’s really easy for us, in all our modern wisdom, to brush off this sort of childhood as being a thing of the past, but can we afford to merely relegate it to the history books?

In my humble opinion, no we cannot.

Yes, we live in an entirely different time with more concerns and more dangers, but for the first time in history, we have a generation of kids who aren’t outside and aren’t moving their bodies. Unstructured play, rolling around in the grass, or playing in the dirt are identified as being crucial to human health and development, we can no longer dismiss them as the optional, silly parts of childhood.

If this trend continues, where will we be? 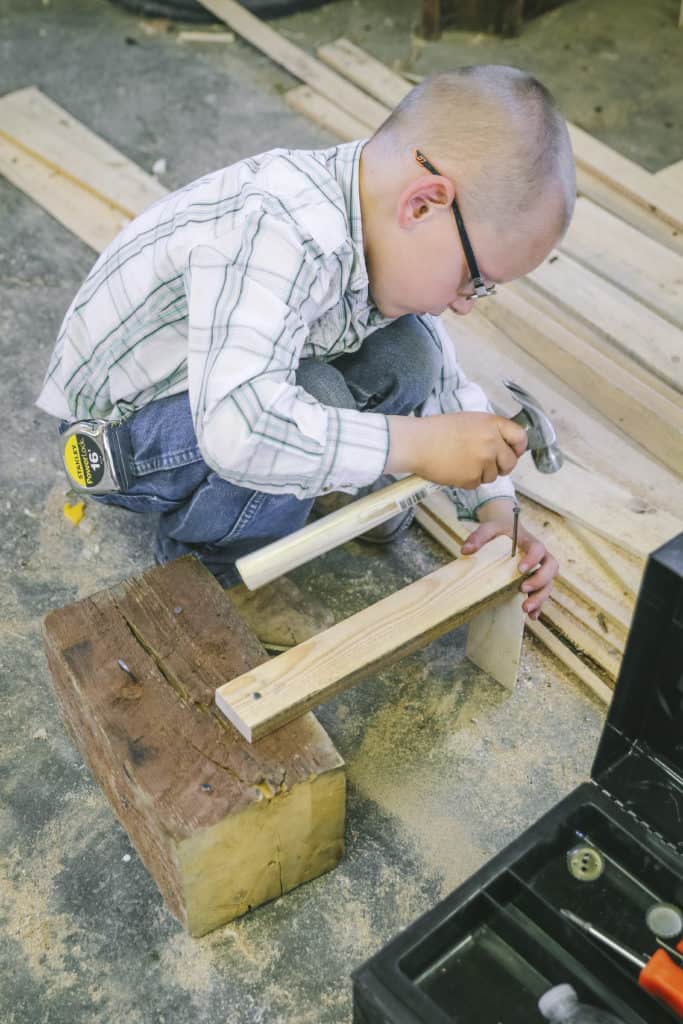 As I watch our kids race, imagine, explore, and create, I am fascinated to watch valuable traits naturally emerge. The kind of traits that will carry them far into adulthood.

They carry themselves with confidence. They find joy in their work (most of the time…) They are creative. They have the ability to solve problems on their own (like filling and carrying a heavy chicken bucket, and coercing the escapee horses back into the right pen).

Is it sunshine and roses all the time?

Well, of course not. 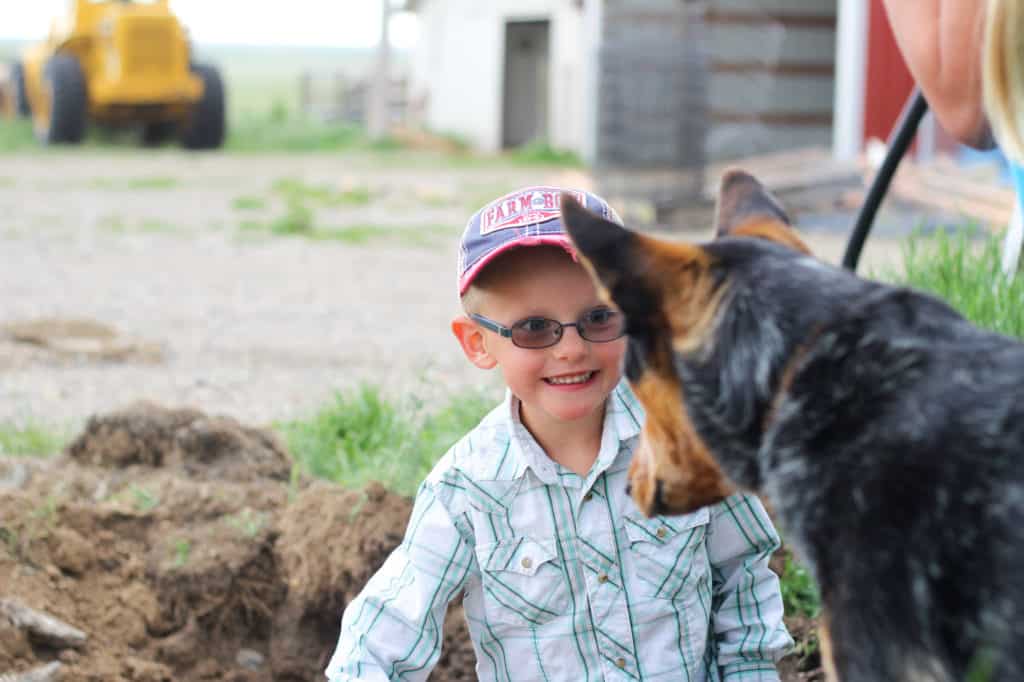 But that just comes with the territory.

I’m not claiming to have it all figured out, not by a long shot. And I’m usually extremely hesitant to give parenting advice, because, well, my oldest is only 9 and I still have yet to determine how this whole gig will turn out.

But I am completely and utterly convinced one of the most powerful parts of a healthy childhood lies is the unstructured free time. 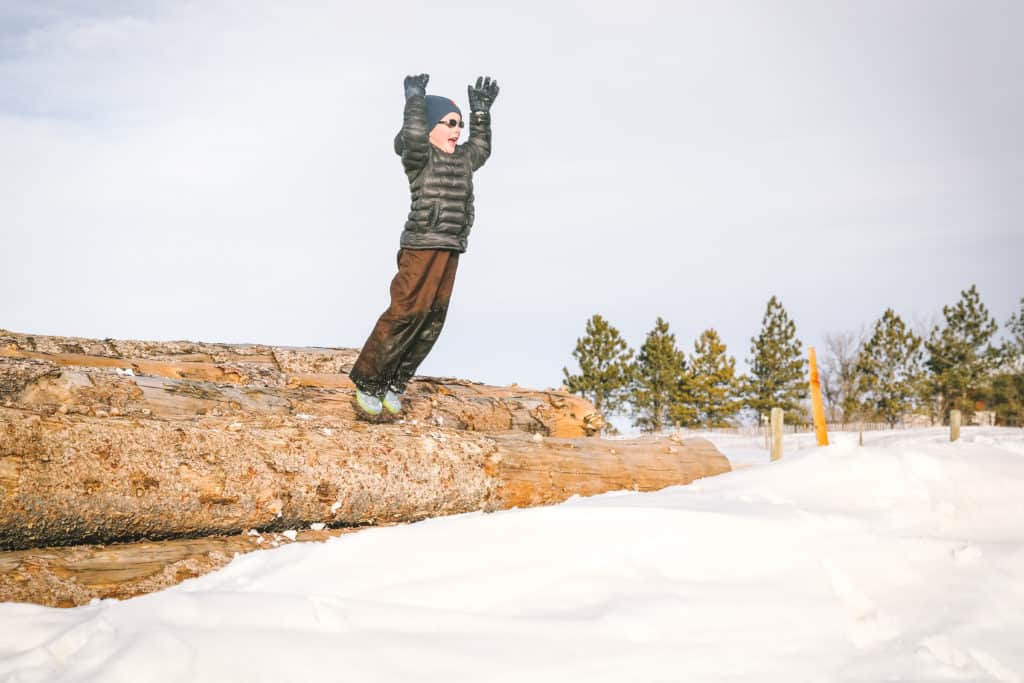 How to Start Implementing an Old-Fashioned Childhood for Your Kids

Whenever I talk about this, naturally, the logical question that arises next is, “And how exactly does one do this?”

Step One: Kick them out the door and leave them alone.

Step Two: Repeat the next day.

Kind of kidding…. but not really. I realize dangers do exist. And it’s quite likely that you’ll be able to let your kid ride their bike across town (unless it’s a very small town). Of course, you’ll need to weigh the risks in your particular situation and be mindful of them.

But we do kids a disservice by scheduling them too much.

Don’t fear their boredom– that’s where creativity is born.

Fight the urge micro-manage them.

Teach them to wonder and ask questions.

Give them hours on a summer day to hunt insects, look at clouds, and roll in the grass.

Please don’t misunderstand. I’m NOT against putting your kids in activities (we do 4-H and a weekly homeschool co-op), but when it comes to the most meaningful activities we do as a family, I’ve found that my kids light up the most when they have the chance to be a part of something bigger than themselves. 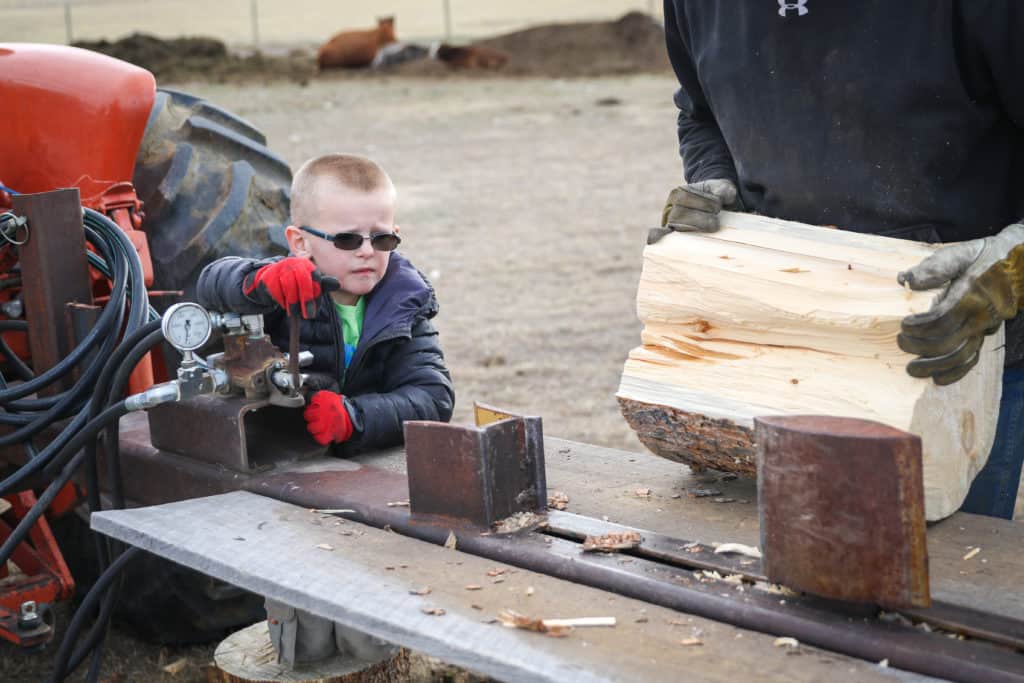 For us, growing food together is more meaningful than finger-painting. Not that there’s anything wrong with finger painting… But my kids love knowing the green beans they planted are a crucial part of our family’s meal plan come July, they argue over who gets to smash the tomatoes into the food mill when we make sauce, and Mesa beams with pride when she can rattle off the tag numbers of our beef cattle by heart.

So no… I’m not a mommy blogger, and I won’t pretend for one minute that I know everything about parenting or raising kids. But I wholeheartedly agree with Mr. Rogers when he said, “Play is the work of childhood.”

And I’ll venture to say that if we can parent like it’s 1955, our kids will be a whole lot better off.

(Closing Note: This post wasn’t written with the intention of making anyone feel less than or guilty about how they parent their children. All families are different. That being said, I hope it serves as an inspiration and a spring board for parents desiring a different sort of childhood for their kids. Also, we aren’t purists at our house– my kids do watch limited amounts of TV, which doesn’t bother me, as long as it’s punctuated by plenty of free play outside.) 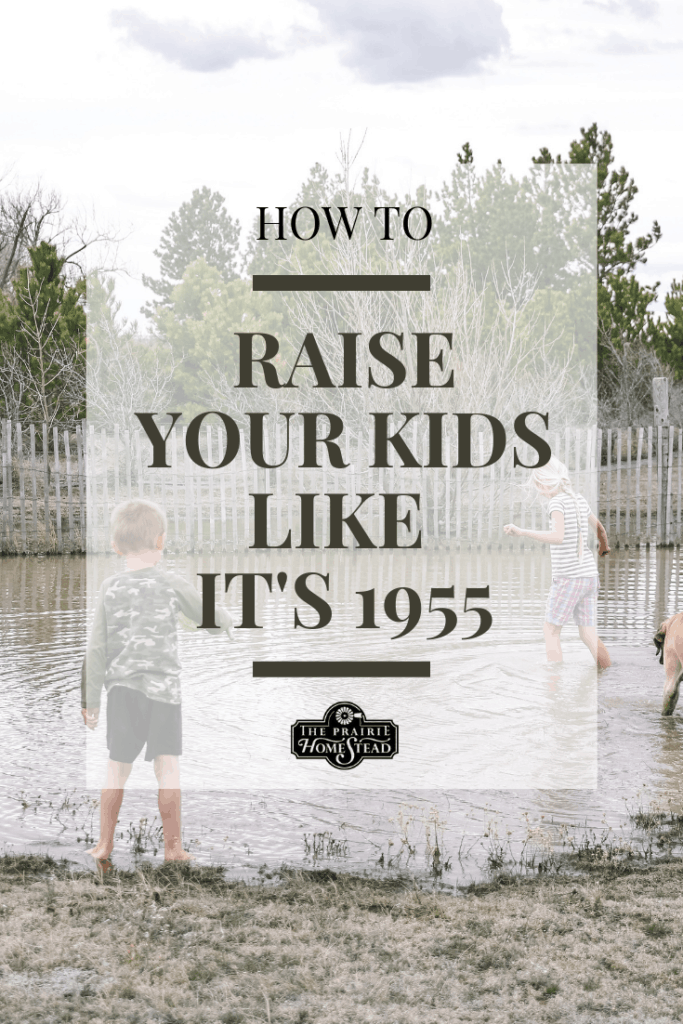 The post Raising Old-Fashioned Kids in a High Tech World appeared first on The Prairie Homestead.

This Article Was Originally Posted at theprairiehomestead.com Read The Original Article Here