7 Of The Best Composting Toilets: a Review Guide - Homesteading Alliance

7 Of The Best Composting Toilets: a Review Guide

In this exclusive composting toilet review guide you will discover exactly what they are, how they actually work and what the best toilets on the market in 2018.

Environmental conservation and eco-friendliness are more than just passing fads. If we want to be good stewards of the Earth we need to adopt practices that reduce our impact on the planet to leave it in better shape for our children.

There’s plenty of ways to do just that. Strategies ranging from using energy-efficient light bulbs to recycling to relying on solar panels for electricity are all excellent eco-friendly alternatives. Another way to “go green”, however, is right under your nose: switching to a composting toilet is often a better way to handle human sanitation.

What is a composting toilet?

A composting toilet isn’t much different than a traditional flush toilet when it comes down to looks. You’ve still got a regular-shaped seat and lid, but there’s no flushing mechanism — there’s no tank! Instead, composting toilets have a receptacle under the bowl where the magic happens.

These receptacles either close automatically after you’re done using the composting toilet or can be closed manually with a turn of a knob or the push of a button.

How does a composting toilet work?

Unlike flush toilets, which focus on using water to remove human waste to be routed to a waste disposal system like a sewer or a septic tank, composting toilets use little to no water at all. Instead, waste gets subjected to a natural reaction, one that doesn’t involve the introduction of artificial chemicals.

The only process at work is aerobic: peat moss and sawdust mix with the waste, and air is introduced to power a microbial reaction that breaks down the waste, dehydrating it and, eventually, turning it into compost — fertilizer.

Does it smell bad?

Composting toilets are not just modern chamber pots. They’re not modern outhouses, either, and the smells associated with a composting toilet are not nearly as bad as you might think.

That’s because of two very important factors: number one, the holding tank for waste as it gets turned into compost is usually separated from the toilet bowl itself by either a manual or automatic closure, and two, all but the smallest and most portable composting toilet systems are vented to prevent any unpleasant odors from lingering.

How do you use it?

A simple, portable composting toilet, the kind you would typically take with you camping, usually features a hand-crank to manually aerate the waste to speed up the dehydration and composting process, but the upside is that these can be used anywhere and in any conditions.

After a specific period of time, you simply remove the holding tank from the toilet itself and then spread the compost in places where it’s needed, such as in gardens and flower beds.

Bigger, less portable models often usually mean less hands-on maintenance at the expense of an electrical connection. Electric motors drive a macerator for aeration; these bigger units also have a heater installed to keep the waste at a temperature that’s ideal for turning it into compost.

Finally, these often also have blower fans to facilitate venting. This usually makes the compost removed from these types of models higher quality and easier to handle.

The Best Composting Toilets on the Market Today

This compact and robust composting toilet is a favorite, especially when it comes to providing toilet facilities in smaller spaces like RVs or boats. In fact, the Nature’s Head was originally designed by a pair of sailors, and it even comes with a “spider” handle style crank for installation in tighter spaces.

One of the best sealed and vented composting toilet systems, the Nature’s Head hand crank is used for agitating compost and its electric blower fan with a flexible 5′ long hose is used for venting. Other perks, like featuring completely waterless operation and collecting waste liquid in a separate container, makes this model very popular 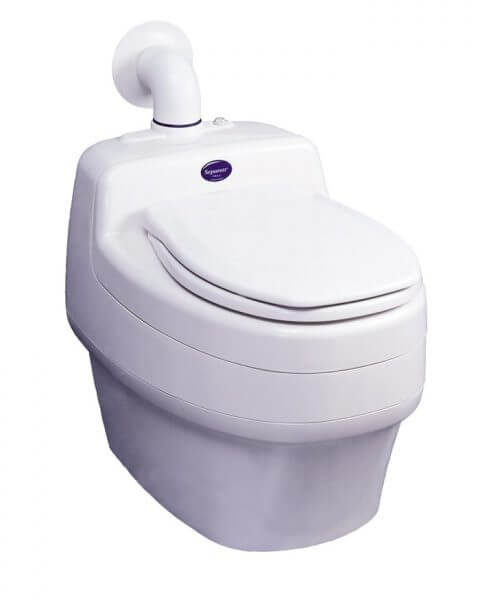 Featuring similar performance to the Nature’s Head but with a much more streamlined and less bulky look, the Separett Villa 9200 is perfect for part-time vacation homes or getaway cabins. Liquid waste can be routed completely outside – the company recommends using an external drain pit.

The Separett Villa also features an electric venting fan, but there is no hand crank. Instead, this composting toilet comes with biodegradable composting bin liners that make it easy to dispose of waste as its modestly-sized compost receptacle fills. You can then transfer these bags to a nearby compost pile to let nature finish the job. 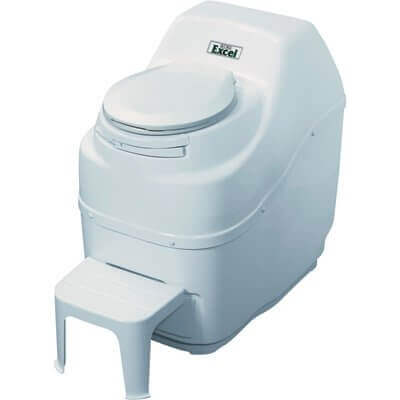 The grandaddy of composting toilets, the Sun-Mar Excel is one of the oldest models out there. Sadly, this shows in its design: the Excel is a self-contained unit but it features a very large composting bin, necessitating the inclusion of a step stool. Still, we’re including the Sun-Mar Excel here because there are hundreds of satisfied customers who have been using their unit for decades or more.

The Excel is designed that way because Sun-Mar uses a drum system for its hand-driven crank agitator, and while the approach might have been innovative years ago, today it’s not quite as useful. Additional concerns before looking into a Sun-Mar Excel for your own use include some complaints about newly-constructed models not being as robust as older ones, sometimes even leading to claims of leakage. 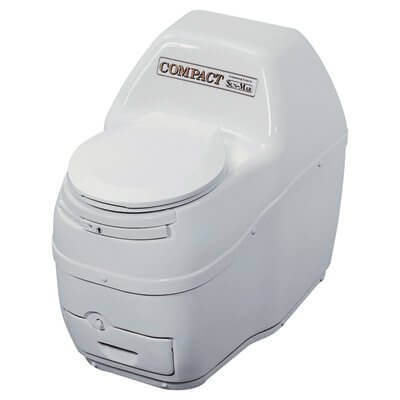 Featuring the same waterless, drum-based composting tech of its bulkier predecessor, the Sun-Mar Compact does have a front-mounted agitator crank. This makes it not-so-great for spaces without enough forward clearance — something to keep in mind when selecting this model composting toilet. 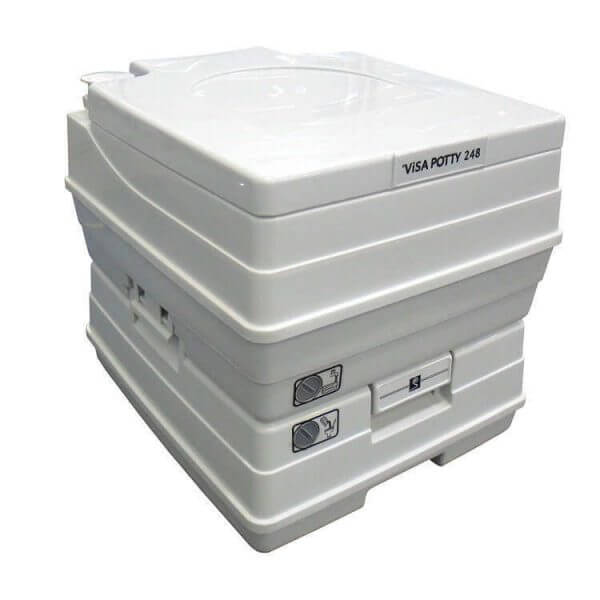 The Visa’s Model 268 composting toilet isn’t going to win any beauty contests. Its square and boxy aesthetic is utilitarian as it comes. However, it’s this focus on function over form that makes the Model 268 a snap to clean and empty thanks to its well-engineered quick-release latches.

Another feather in the cap of the Model 268 is that it is eminently portable, making it a great choice for travel or for transporting to an off-grid cabin. One important facet to keep aware of, however: the seal between the top and the holding tank is so good that the bottom half can pressurize if you move from the lowlands to the mountains, so make sure to vent it properly in these situations. 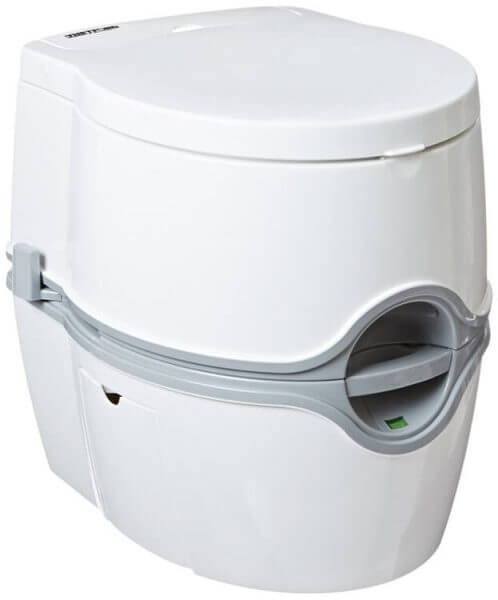 Unlike the Visa 268 the Thetford Porta Potti is actually pleasant to look at. Featuring a curved front and a seat height that brings it roughly into the same dimensions of a traditional toilet, the Thetford gets high marks for comfort and design.

This completely self-contained unit is not a great choice for permanent installations, however. The seal between the toilet seat and the storage tank suffers from the same pressure problems as the Visa 268, and are perhaps even worse, and stability issues necessitate the use of a “hold down kit” that’s separately available from the manufacturer. This makes the Thetford ideal for small-scale use but otherwise not much else. 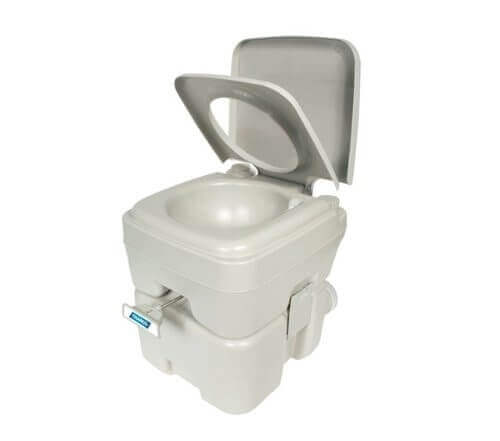 Designed specifically for travel use in RVs and boats, the Camco Standard is an excellent choice for anyone road-tripping it in style.

While it does have some serious drawbacks, such as having a very small capacity when compared to models that are more accustomed to permanent installations, the ease-of-use of the Camco Standard puts it in contention for anyone who needs a compact, self-contained travel toilet.

Much like the Visa 268, the Camco Standard isn’t much to look at; it’s boxy and unremarkable. However, Camco does have a “Premium” version of its travel toilet that features an updated, curved front to give it a look much more reminiscent of the Thetford without sacrificing any of its functionality.

You’re not going to be winning any beauty contests either way, but your waste will be kept safe and secure until your travels come to an end.